Well, that's it. The Ottawa Senators were eliminated from the Stanley Cup playoffs last night. Swept, actually, by Crosby, Malkin, and the rest of the Pens. Four straight games. Sweet revenge for Pittsburgh after last season's playoffs, but for us Ottawa fans, it sucks majorly.

This time last year, we were just revving up. The Sens Army, ready to bring home the Cup. It was a joy to still have hometown hockey deep into springtime -- I actually watched one of the last games last year out on the deck in my bathing suit on a 13" TV swiped from my daughter's bedroom with rabbit ears and an extension cord. It was wonderful.

After posting the best opening to a season EVER, something happened, and the team floundered. I can't explain what happened, but the self-destruction was sad to watch. They seemed to have everything going for them and then it all fell apart. John Buccigross of ESPN hit the nail on the head when he said that if Britney Spears was a hockey team, she'd be the Sens.

Making this sad situation even sadder, is the fact that in all likelihood, Wade Redden has played his last game as an Ottawa Senator, since his contract is up this summer. The second-longest-serving Senator, after Daniel Alfredsson, he's been a backbone of the team for 11 seasons. He's a team player, assistant captain, great defenceman, and a man who gives generously of his time and money for charitable causes in Ottawa. The son of a friend of mine has had the opportunity to benefit from one of these causes. Wade's World, a private box in Scotiabank Place, is filled with kids from CHEO (Children's Hospital of Eastern Ontario) for every home game courtesy of Wade.

He's by far my favourite player, and in Derfwad Manor parlance, my secret boyfriend. (Here I quote the lady of the Manor: "Mrs. G. says secret boyfriend because while her love and esteem for these men is as rich and delicious as the mocha filling of an exquisite truffle, they have no idea that Mrs. G. exists." See? Secret boyfriend. What a concept.) In fact, I think that it's only the fact that Wade is a Canadian sports figure most of a continent away from Mrs. G. that has kept him from her purview and prevented her from drafting him into her stable of secret boyfriends to while away the hours with Johnny Depp, Viggo Mortensen, George Clooney, et al. (Hands off this one, Mrs. G. He's mine.) I mean, just look. 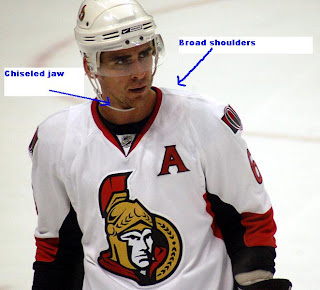 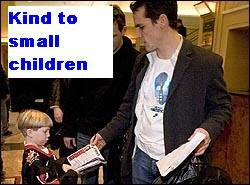 He's the complete package. I do realize that the fourteen-year difference in our ages means that this crush puts me uncomfortably into cougar territory. I don't care. Secret boyfriends are OK with that.

And though the car flag and my red teeshirt are being retired for the summer, they'll be back again in October. And so will the Senators. There's always next season.
Posted by alison at 4/17/2008

Email ThisBlogThis!Share to TwitterShare to FacebookShare to Pinterest
Labels: Hockey