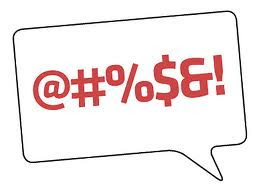 I was driving home from grocery shopping with the girls a couple of evenings ago. The radio was on, but I wasn't listening -- my mind was far away, already thinking of the other things I had to do once the groceries were put away and the children in bed.

Leah: Why did he use that word?

Me: (coming out of my reverie) What?

Leah: He just said a bad word on that commercial.

Me: (listening now to the tail end of a car dealership ad) Really? What did he say?

Me: (nearly driving off the road, laughing) Oh, honey, I'm pretty sure he said "no-hassle financing."

Leah: (laughing along with me) I guess that makes more sense. Otherwise, they wouldn't give financing to people who are... you know...

It's probably a good thing that there isn't any no-asshole financing. If there were, I can think of a few people I know who wouldn't have cars.
Posted by alison at 10/28/2010 6 comments:

Rachel turned 8 last weekend. She planned an almost-24-hour birthday party which included a trip to the pool at the rec centre (the one with the cool waterslide), pizza, Boston Cream Cake, a movie and a sleepover. It was an unqualified success. Lots of fun was had by all the kids. 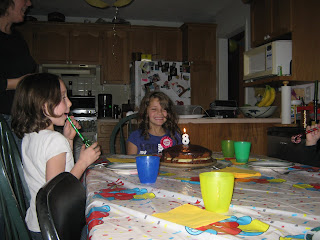 During the party, Leah and I decided that we really didn't want to watch Furry Vengeance with the 8-year-old partygoers, my tolerance for Brendan Fraser not being at an all time high. So we repaired to my bedroom, where we watched Lara Croft: Tomb Raider. I figured that it wasn't too bad for Leah to watch -- less gore than the Indiana Jones movies, and about the same kind of plot. I'd forgotten a few things about the movie in the years since I first saw it though:

1. Despite what the credits say, the two main actors in the movie are Angelina Jolie, and Angelina Jolie's breasts. They're in almost every scene. Front and centre. 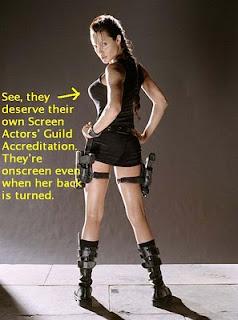 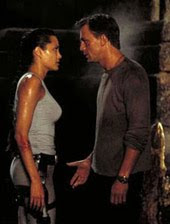 (I have to give him kudos for looking her in the eyes in this picture. I'm pretty sure those things would exert an actual gravitational pull.)

3. Daniel has an almost-nude scene in the movie. 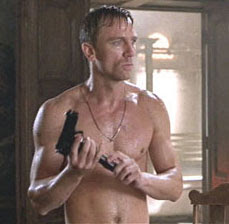 Yes, he's taking a shower (!) and hears a noise. Stepping out of the shower, and not bothering to grab a towel (squee!) he picks up his gun, and posing carefully behind a view-blocking table (what's the opposite of 'squee'?) he inserts a new clip into his gun (see picture above) and then walks to the door. He throws it open to reveal a startled chambermaid, who screams and throws a towel at him, which, disappointingly, he wraps around himself while apologizing to the maid in Spanish. Still PG rated, yet the scene makes the whole silly plot, Daniel's atrocious attempt at an American accent, and the wall-to-wall presence of Angelina's boobs worth watching.

Leah: Did you rewind that?

Me: I couldn't hear what he said at the start of the scene, so I rewound it to see if I could hear it better.
(I figured it was pretty good thinking on my feet, if I do say so myself.)

Leah: He was in the shower. He didn't say anything.