A whiter shade of pale

Have you ever been in Florida or Arizona in the winter months? And have you ever walked past a hotel, snug in your cardigan/jacket/windbreaker, and noticed very, very pale people cavorting in and around the outdoor pool in bathing suits saying things like, “I can’t believe how *warm* it is!”? Those people are Canadians.

I should know. I’m one of them. I remember December 2006, basking by the pool outside a Phoenix hotel while grounds staff wearing long pants and jackets wielded leaf blowers the other side of the ornamental fence. Christmas carols were playing, and my kids and I were jumping in and out of the emerald-green water of the outdoor pool.

Cut off from the sun and subject to subzero temperatures for long periods of time by our lengthy winters, Canadians (especially those like me, who are of British ancestry) on holiday in tropical climes will strip down to shorts or bathing suits as soon as the thermometer creeps above 18°C (66°F) and expose their blindingly white skin to both the elements and the locals with exuberant abandon. This is so prevalent (and we are so very, very pale) that the only way you can see Canadians lying on a nude beach, and avoid stepping on them, is to watch for them to blink. (Not that I'd know about the nude beach from experience, mind you, I'm just sayin'.)

This carries over into our behaviour at home. Long after our neighbours to the south are giving themselves sunburns while gardening, we are shovelling the last patches of snow off the lawn and onto the driveway to get it to melt faster (and believe me, the irony of that situation after a winter of doing it in the opposite direction is not lost on anyone). So when an unseasonably warm Saturday rolls around in mid-to-late April and the thermometer goes up to 27°C (84°F), tradition dictates that we purchase beer, fire up the barbecue, uncover pasty white arms and legs, and let the children welcome the warm weather with the annual rite of spring: the slip 'n' slide.

The sharp-eyed among you will notice that while there is no snow left on the lawn, there are no leaves on the tree yet either.
Posted by alison at 4/27/2009 16 comments:

Email ThisBlogThis!Share to TwitterShare to FacebookShare to Pinterest
Labels: Family time, I am Canadian, Our house is a very very very fine house, We kind of live in the country - near cows and wildlife and stuff

The Universe still has a sense of humour

This is the last song I heard on my MP3 player in the Radiology waiting room before my name was called to go in for my mammogram.

Email ThisBlogThis!Share to TwitterShare to FacebookShare to Pinterest
Labels: Alison vs. the Universe, It's all about me, Life in general

For XUP and Loth

Even lower primates, such as Ring-tailed Lemurs, know that toast should be buttered and eaten while hot. 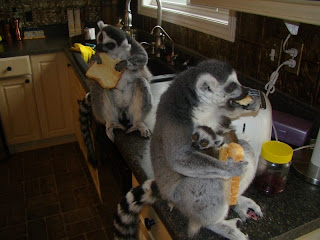 (Click to enlarge. Do it. They're really cute.)
And so, to recap: 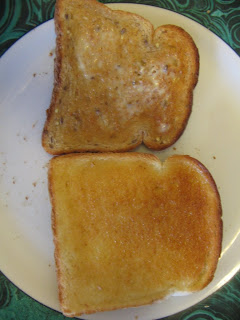 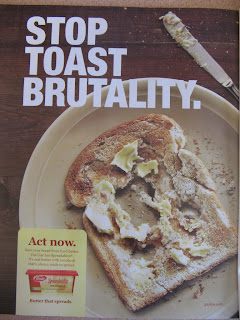 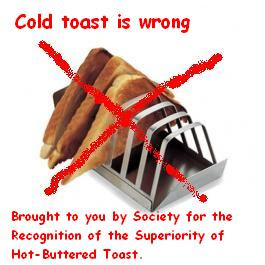 (Photo credits: adorable lemurs courtesy of a friend of a friend, thank you C&J scrumptious hot-buttered toast (both multigrain and white), dripping with buttery goodness courtesy of my toaster oven and camera; cold, brittle, mutilated toast courtesy of an ad in the last LCBO Food and Drink mag, photographed by me.)
Posted by alison at 4/21/2009 15 comments:

Carp to Belle River, a journey in random mode

Unlike the trip back from visiting family for Easter, the trip down was actually a pretty good one. The car was well provisioned with snack foods and juice boxes for the kids, and diet Cokes for me. The gas tank was full, and the MP3 player was charged.

I don't have an iPod, I have an RCA Lyra which has a very temperamental operating system that makes random mode about the only good way to listen to it. I loaded it up with songs that I like, and ones the girls like, and hooked it into the FM modulator so we could listen to it over the car radio. On the dot of 7 a.m. (well, more like 7:15, but still scarily on schedule) we hit the road. I pressed play.

7:17 a.m. Pulling onto Craig Side Road. Playing: I Wanna be Sedated by the Ramones.

9ish. Hwy 7, somewhere near Tweed. Playing: She's got the Jack by AC/DC.

What a long strange trip it's been

I'm just dashing this off quickly before I head for bed. I have a longer, much better post describing my trip from Ottawa down to Windsor percolating, and maybe I'll get to write it tomorrow. Instead, you get a few random thoughts about my trip home today. All 13 hours of it.

Catch you tomorrow. I'm off to bed.

Email ThisBlogThis!Share to TwitterShare to FacebookShare to Pinterest
Labels: Alison vs. the Universe, Life in general, Life with Leah, Life with Rachel

Last Sunday it rained. It was dreary and cold, and Rae was playing over at Kate's, so Leah was bored. Crafts soon palled, as did the TV, and for once Lemony Snicket failed to enchant. What to do with a bored nine-year-old? Why, introduce her to movie-making, that's what.

Inspired by XUP, and her sarcastically funny films An Evening at the XUPs and XUPs Go Shopping, I fired up the computer, went to Xtranormal, played around with it for a few minutes with Leah, figuring out how to work things, and then left her to it. She wrote, produced, and directed two short films.

The results speak for themselves.

Set in jarring juxtaposition against the disparate backdrops of a sterile suburban tract house and an idealized Japanese landscape of blooming cherry trees, these intertwined examples of her ouvre show clearly the existential angst of living in constant conflict with a younger sister.

In the first film, Me and Rae, the fact that Leah appears smaller than her younger sister demonstrates clearly the Jungian underpinnings of the eternal sibling rivalry. In the second film, Me and Rae II, the roundness and fuzzy amiability of the Leah and Rachel teddy bears and the beauty of the fairytale setting contrast with the harsh way the two characters treat each other. Both films, however, do show the sisters reconciling, perhaps indicating that peace is still attainable in a hostile and uncaring world.

ME AND RAE II

Truly a cinematic tour de force. Of course, being her mother, I could just be biased.
Posted by alison at 4/03/2009 11 comments: