For an assignment in her English class, Rachel had to design a cereal box for a new cereal, and then write a letter to a cereal company and convince them to buy and market it. The idea was to teach the students to write persuasively and to use facts or reasons to back up their statements. The letters had to have an opening statement, three reasons why the company should buy the cereal, and a closing statement.

Of course, designing the box and naming the cereal was the fun part. I present to you, Wizerd Crunch! (The 'a' in Cranch was a mistake, I'm assured by the designer.) Produced by Magic inc, it prominently features 'games on the back' of the box. Cool! (Click picture to enlarge.) 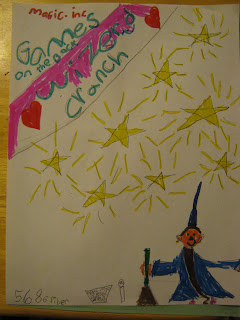 But this is what caught my eye: 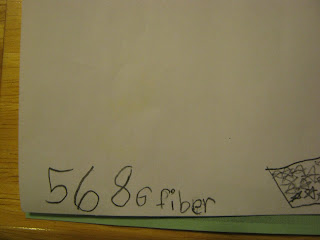 Yep, 568 grams of fiber. Yipes! The super-duper bran cereal that I sometimes choke down eat for breakfast has 13 grams of fiber. Sorry: fibre. (Rae needs some remedial Canadian spelling work.) I can only imagine that if you ate some Wizerd Crunch for breakfast you wouldn't want to wander too far from the bathroom. Or you might need a magic wand for cleanup.
Posted by alison at 3/24/2010 15 comments:

Overheard last night, coming from the bathroom where the girls were brushing teeth and getting ready for bed.

Rachel: "Oh. Sorry. I keep getting that mixed up."

Rachel, while watching me cover the smoke alarm with plastic wrap to stop it going off after I accidentally melted some plastic on a stove element (I'd reset it, and then it would go off, over and over again, which was very annoying while I was trying to cook dinner):

Email ThisBlogThis!Share to TwitterShare to FacebookShare to Pinterest
Labels: Life with Leah, Life with Rachel 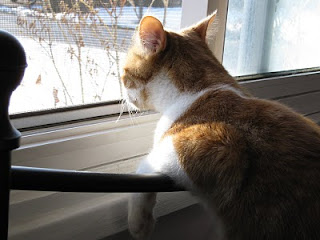 I am ignoring you, Large One.

You think I'll overlook the many wounds to my dignity simply because you bring me a terrain de jeu...a play structure...a cat tree? Surely you jest. My disdain knows no bounds and words cannot convey my sarcasm. 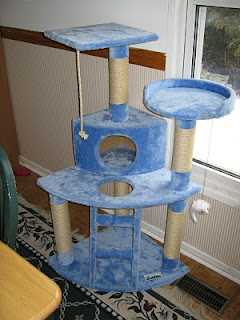 I will not lower myself to set paw on this.....this....abomination. 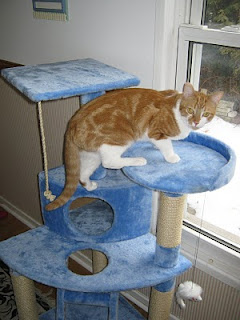 Though it is plushy and soft. And it has many enticing levels where one may keep an eye on one's prey. 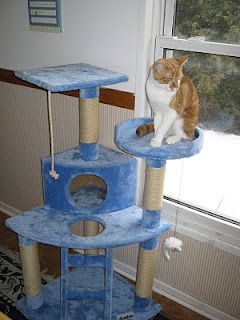 And the small fur mouse is intriguing.

I will ignore it totally! 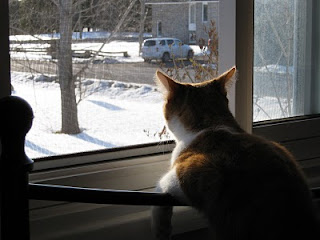 Except it has a mousie. 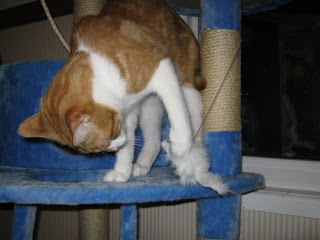 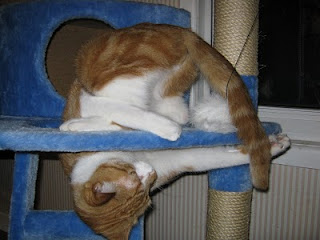 And a lair! I've always wanted a lair, it befits my assassin role. No one can see me in here. I shall swoop out and inflict death from above. Fear me, mortals! 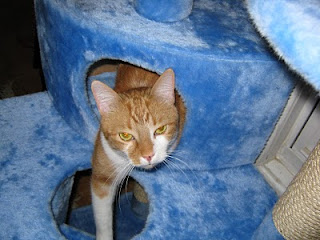 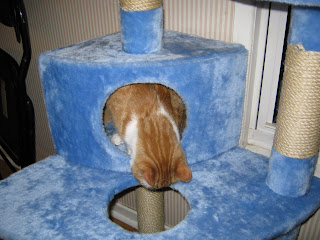 And the rope thingie. To practice my martial arts and improve my lightning reflexes. 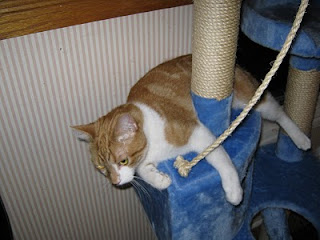 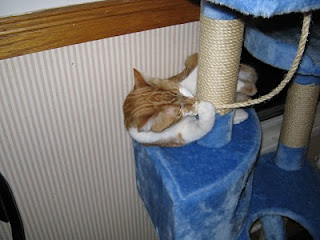 Alright, human, I shall accept your paltry gift.

Behold! The lair of the evil ninja assassin cat! 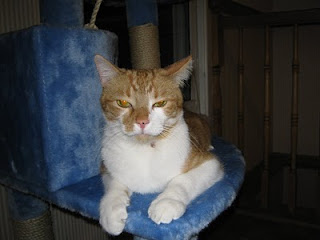 (Thank you, Natalie, the ENAC loves his cat tree - Alison)

Email ThisBlogThis!Share to TwitterShare to FacebookShare to Pinterest
Labels: Evil Ninja Assassin Cat, The cat's got my tongue

Among the many promises to balance the books and deal with the deficit in yesterday's throne speech by Governor General Michaelle Jean, one thing that raised eyebrows was the Conservatives' plan to ask Parliament "to examine the original gender-neutral English wording of the national anthem."

Let's see how that might be accomplished. Imagine, if you will, a grey committee room somewhere in a grey government office building where a couple of low-level functionaries are drafting a briefing note for Parliament.

"OK, let's get this done. Which line are we changing?"

"True patriot love in all thy sons command." It's sexist. No mention of women."

"Well, what are we changing it to? How about 'In all our kids command?' 'In all our people command'?"

"Apparently the original line from 1908 is 'True patriot love thou dost in us command'."

"Ummm" [tapping furiously on laptop] "It's the archaic singular form of the present tense (indicative mood) of the the verb 'do'."

"Heeeey, you know, if we make this change to make it more gender-neutral, you just know we're going to have to go back in later and make it more PC for other groups. Why don't we just be proactive, and..."

"I hate when you say 'proactive.' You're gonna start saying 'stakeholder' next, aren't you?"

"Shut up. Why don't we look at the rest of the lyrics and see if we can see any other trouble spots now? We can save time and put them all in this briefing note."

[Singing to himself] "'O Canada, our home and native land'...RED FLAG."

"'Our home and aboriginal land'?"

"Or should we use 'First Nations'?"

"I don't think it's being used like that. I think it's 'native' like belonging to the land, you know, like native plants. People whose home Canada is."

"Is that going to be a problem? There are a lot of seniors with heart problems - number one killer of Canadians, etc., etc., blah, blah, blah. Do we want to alienate the seniors? They vote. A lot."

"I see your point. We don't want to give the impression that only people with good undamaged hearts are patriotic. Even someone with a myocardial infarc can be a loyal Canadian."

"Yeah, and why single out the heart? I think other organs can be patriotic. God knows we need a strong Canadian liver to deal with all the beer we drink."

"Bazinga! That's genius! They don't have to have healthy organs, just competent ones, and if the organs aren't even competent, well, they're not around to be or not to be patriotic, and ergo, can't complain about the lyrics. You're good.....Wait, something's still off. 'We see thee rise'? That totally excludes the visually impaired."

"Damn, you're right. 'With competent organs, we perceive thee rise'? That takes in all the senses, right?

"Yep. Good work. Next: 'The true north strong and free.' Not all Canada is north. Windsor, Ontario is actually south of Detroit. I'm thinking we lose the southwestern Ontario vote if we leave 'north' in. They're the geographically-challenged Canadians.

"How do we get around that one?"

"'The true north (and areas to the south of north) strong and free.'?

"It's not going to fit in with the music."

"They'll have to sing faster."

"Nope, it's the country that's wide.'

"'We stand on guard for thee'. Can you believe it? The Paralympics are about to start, and everyone will be singing the anthem that excludes people with physical disabilities. Not everyone can stand, you know."

"I know. I can't believe that one got past people for this long."

"Let's make this positive: 'We accomplish being on guard for thee'. It side-steps the whole 'standing' issue and stresses accomplishment. "

"'God keep our land, glorious and free.' Hello? Separation of church and state, anyone?"

"Yeah, maybe we should take 'God' outta there. But what do we put in instead?"

"'Something keep our land, glorious and free,' it's PERFECT. That way, the atheists can argue that 'Something' is ourselves and our secular moral values, while religious Canadians can see that 'Something' represents their deity of choice. It's the perfect word. It has diversity and can mean something different to each singer. We've added diversity. It's a good thing."

"OK, Martha, let's bring this baby home. We reprise with 'O Canada we accomplish being on guard for thee'."

(Disclaimer (because, you know, I'm Canadian [and a low-level government functionary to boot]): This is just my tongue-in-cheek way of saying, "Please don't mess with the lyrics, they are fine the way they are now. People searching for evidence to judge how women are treated in Canadian society should look at Canadian society, at the Governor General and women in every walk of life, and in every conceivable job in the workplace, and in the provincial and federal legislatures, and not at one small word, 'sons', in the national anthem. Seriously. Get a grip, people.)

Email ThisBlogThis!Share to TwitterShare to FacebookShare to Pinterest
Labels: I am Canadian, Politics 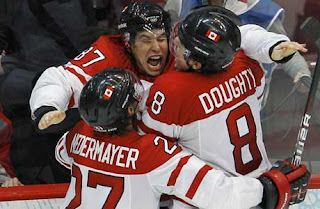 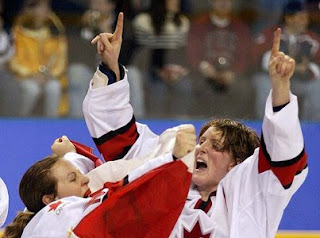 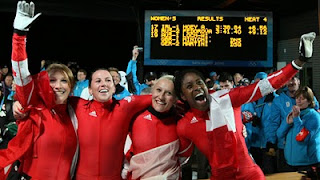 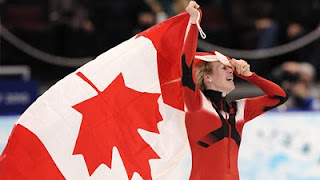 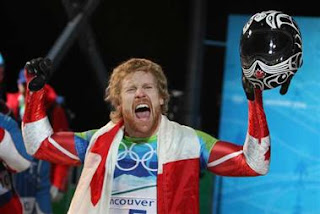 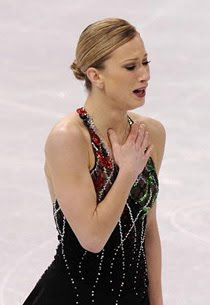 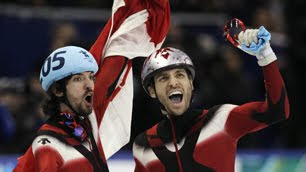 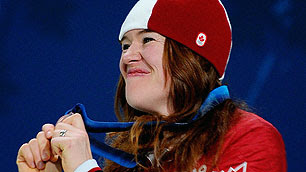 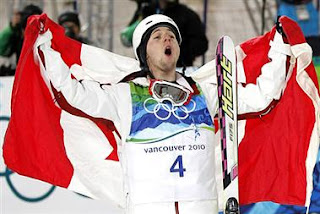 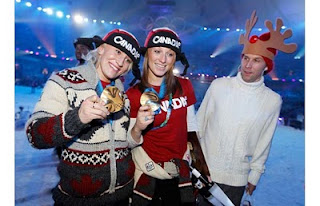 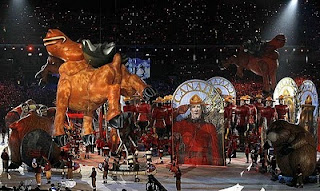 Photos courtesy of Google. Extreme national pride courtesy of all the amazing Canadian athletes. Thank you.
Posted by alison at 3/01/2010 7 comments: