In the movie Amelie, one of the characters kidnaps a garden gnome and takes pictures of him all over the world and mails them back to the owner. I liked that idea, but garden gnomes are too big to carry in my purse. But Gingy isn't, so this is Gingy's trip to Nice.

The first leg of the journey was a train from Ottawa to Toronto to Windsor.  It was a long day. 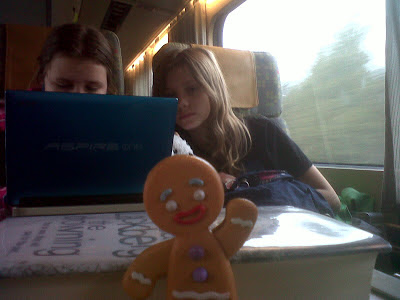 Here is Gingy the next day, checking his luggage at Detroit International airport:﻿ 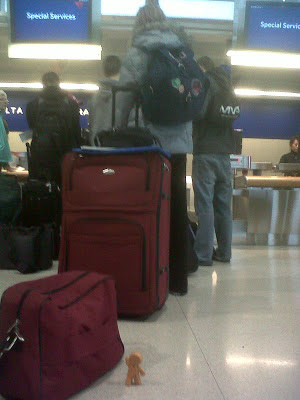 The trip did not go exactly as planned.  We flew from Detroit to New York's JFK airport.  We were delayed almost an hour leaving JFK, and so here's Gingy killing time with the boys in Charles DeGaulle Airport in Paris, waiting to get on a new flight since the delay meant we missed our connection to Nice. 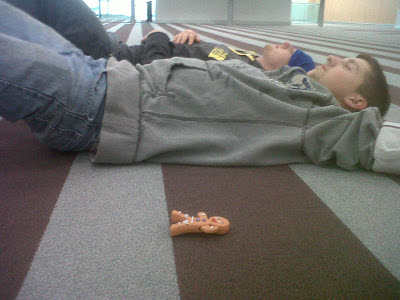 Finally we arrived in Nice with most of our luggage.  Gingy collapsed on a chair on the balcony of the villa.  He was very jet-lagged and in need of a glass of wine. 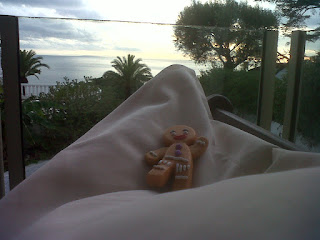 Soon he headed for bed. In the movie star bedroom of the villa. 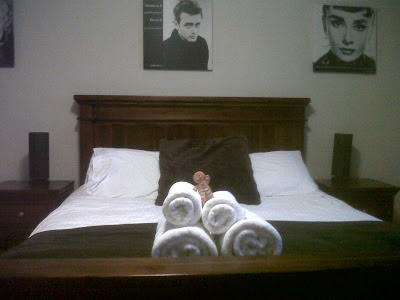 The next day, we went into downtown Nice.  The Port is pretty cool. 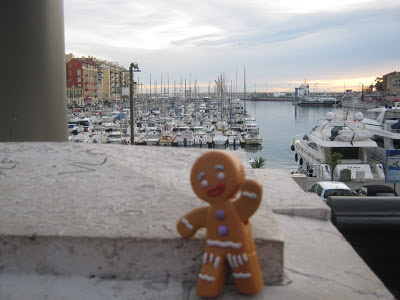 We went into the Old Town (Vielle Ville) and stopped for lunch and a drink in the K'fe Cayenne in Place du Palais: 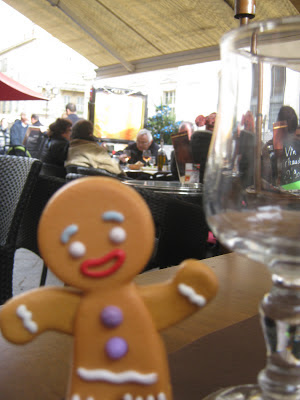 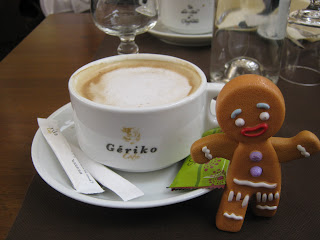 Later we stopped for lunch. You kind of have to order Salade Nicoise when you're in Nice. 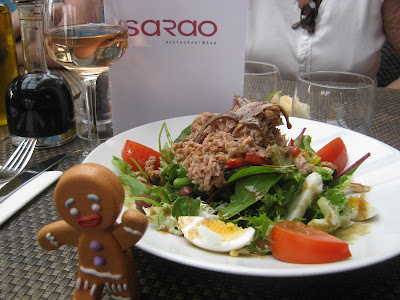 After all that food, cafe au lait wasn't going to cut it. It was time for espresso! 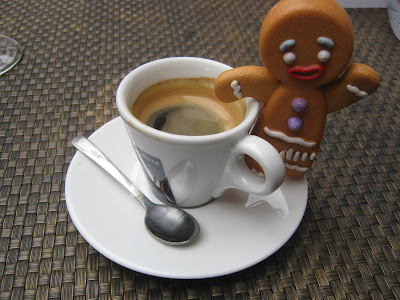 Christmas Eve we made a special feast of cheese and crackers and prosciutto and pineapple and salami and shrimp and champagne.  We even tried lumpfish roe that we bought by accident, thinking it was seafood sauce.  It was salty and fishy.  No one had seconds. 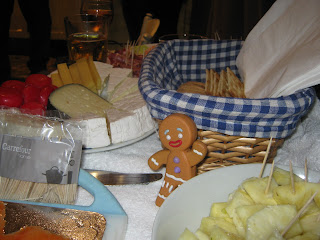 We took turns having our pictures taken in the jacuzzi tub in my Dad's bedroom. 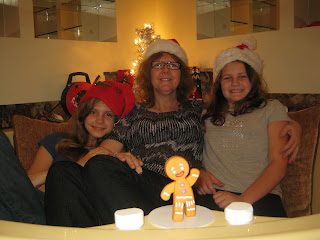 Gingy hit the champagne a bit too hard and decided to wear the wire thingy that came on the bottle. 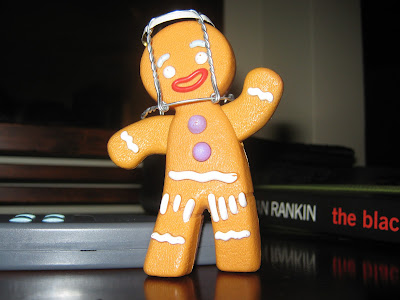 After Christmas dinner, we had Buche Noel for dessert. 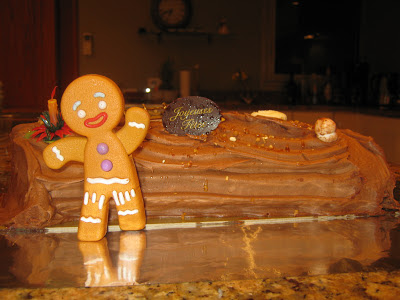 Sadly, Gingy got into an altercation with some locals. 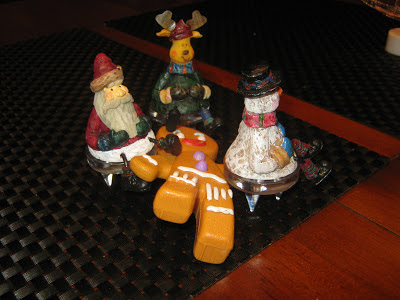 I'm not dead yet 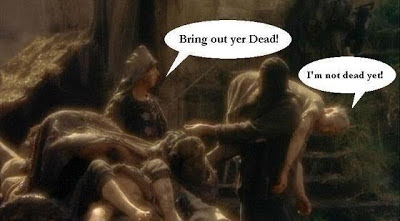 Though you might be forgiven for thinking so, seeing as I haven't blogged since early November.  I've been totally bereft of blog ideas a bit busy, what with Christmas coming and our family's upcoming trip to Nice.

How busy, you ask?  Well, I have one of those perpetual calendars with the dates on little wooden tiles.  Sort of like these, except nicer. 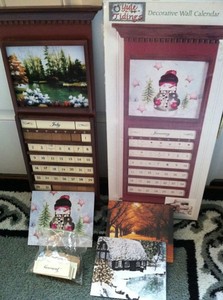 Three days ago, I finally changed it from 'August' to 'December'.

In my own defence, I've also finished a few knitting projects. And shopped for a new car. And worked/commuted/shopped/cooked/drove kids places/etc.  Occasionally, I've slept.

But I need to get back on the horse so that my blogging ability doesn't leave me entirely.  And so, dear reader, here is a bunch of random stuff rattling around in my head.  With pictures.

From the 'NHL lockout' files

I had the following Facebook exchange with my friend Josie on my timeline:

Josie: Just an FYI, I am no longer referring to Bettman as "that troll" but instead as Gollum.

Alison: I guess that money is 'his precioussssss'. Stupid troll.

Josie: Watch a clip of Gollum and then watch Bettman last week during his press conference after talks broke down. Only difference is a suit and a wig.

And you know, I checked out some pictures, and she's right. So I made this for her: 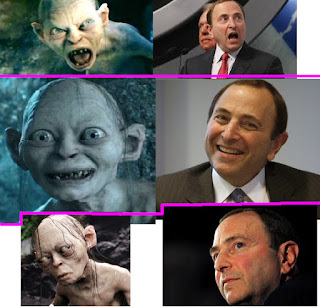 ﻿From the 'You shouldn't have to get wrinkles and pimples at the same time.  It's just not fair.' files

I have a giant pimple on my forehead, right where I would have a lightning-shaped scar if I were Harry Potter. 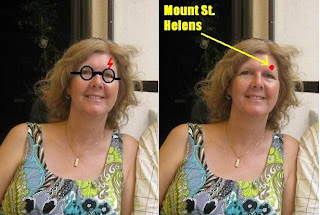 It seems impervious to all my attempts to get rid of it -- creams, ointments, facial washes, even Avada Kedavra.

I am going to call it "The Zit Who Lived." 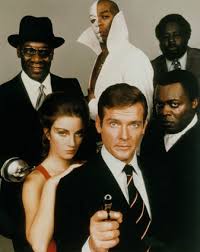 The past few nights, we’ve been piling onto my bed and watching Roger Moore in ‘Live and Let Die’ on DVD. Along with the Daniel Craig movies, I got a DVD with three of Moore's James Bond movies on it for my birthday.

The kids were interested in watching a James Bond movie, and this one, released in 1973 at the height of the Blaxploitation movie genre, has sparked some interesting conversations about racism, as parts of it are set in Harlem and southern Louisiana. The implied sex scenes are pretty tame, and both girls seem to be enjoying watching, though we keep pausing it so that I can answer questions. We’ve been watching about 45 minutes per night.

Part of the plot of this movie, if you’ve not seen it, is that Jane Seymour plays Solitaire, a clairvoyant who can reliably read the future in Tarot cards. She has this power only so long as she remains a virgin. This fact is discussed quite obliquely, and Rae did not pick up on it. Apparently Leah did. James tricks Solitaire with a Tarot deck stacked with ‘The Lovers’ cards and makes quick work of her powers. Offscreen, of course.

So, last night, we were watching the last 45 minutes of the movie, and Rae was full of questions. Leah was patiently answering them:

Rae:“Why is James throwing the chicken on the ground?”
Leah:“So that the alligators will come out of the pond and make a diversion”

Rae:“Why is James’s boat slowing down?”
Leah:“Because when he was escaping, the guy with the hook shot at him and hit the outboard and it’s leaking gas.”

This went on for a while. And then came the question I was afraid would crop up.

Rae:“Why did being James’s girlfriend make Solitare not able to read the future anymore?”

Leah looked at me and said, “Your turn.”

From the "Things in your kitchen that can hurt you' files