According to Rachel: dubious compliments edition 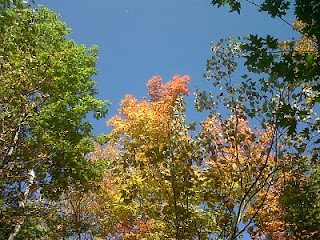 We are having a beautiful early fall here in Ottawa. Warm, sunny days, chilly nights, and cool, crisp mornings. It's making deciding what to wear difficult. You don't want to freeze in the mornings, and you don't want feel too hot in the afternoons.

The girls are reluctant to give up their shorts, and have been wearing a hoodie over a teeshirt with shorts and running shoes to school. This morning, I put on a denim skirt, a dark red, scoop-necked teeshirt, and a camel-coloured cardi on top to keep me warm on the walk from my car to my office.

Rae: You look like a ketchup-ed hot dog today.

Rae: Your teeshirt is like the hot dog covered in ketchup, and the sides of the sweater look like the two parts of the bun on each side.

Me: That's very observant. Is it a compliment?

Rae: I don't know. How does it make you feel?

Me: Not really good, to tell the truth. You're right about the colours, but do I look like a hot dog to you?

Rae: Only a little. You're not made out of pork, though.

That quote, attributed to George Bernard Shaw (and sometimes to Oscar Wilde, people are arguing about this) was meant to refer to Britain and the U.S. But, in my experience, the same can be said for Canada and the U.S.

I was clearing out some old files on my computer and found this guest post that I contributed to a friend's blog some years ago. Alissa doesn't blog anymore, well except for her photo blog where she showcases her gorgeous Kentucky landscapes, sunsets, flowers and dogs, which is a shame. (The fact that she doesn't 'blog' blog anymore is a shame, not the fact that she takes beautiful pictures and shares them online.) So, I've dusted that post off and I'm posting it here.

(This may or may not have something to do with the fact that I'm having a bit of writer's block at the moment, and am dealing with the fall craziness of yard work, back-to-school, pool closing, firewood ordering, garage cleaning, cookie baking, etc., etc.)

Hi, I’m Alison, and I live in a small village just outside Ottawa, Ontario, Canada. Like Briana, who guest-posted last week, I ‘met’ Alissa online through a parenting forum and have known her for probably six years or so [more like 9 or 10 now - Alison]. It was her blog that first inspired me to start one of my own, so I’d like to take this opportunity to say “Thanks, Alissa!”

Internet friendships have added a lot of joy to my life. I’ve been blessed by a wonderful and group of women (and one man) from all over Canada and the U.S., and now new friends in Europe, Australia and New Zealand, reaching out and showing that the world is a pretty small place after all.

But for all our similarities in experience and outlook, I have come to see that there are differences. And being a Canadian with American and British friends, I’m finding that language can be one of those places where those differences pop up.

During one thread on our parenting forum, I mentioned that the girls were getting a new toboggan because the old one was too worn out from banging into trees. Some confusion ensued with Alissa, and when we finally figured out what was going on, we realized that while I was talking about this: 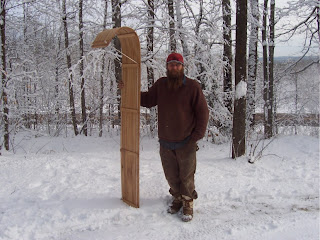 Alissa thought I was talking about this: 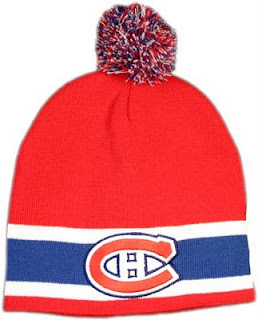 Big difference. Yes, the same word is used in Canada to mean sled and in parts of the U.S. (Kentucky, apparently is one) to mean a winter hat. Which we would call a tuque up here. Go figure.

This reminded me of another miscommunication that happened in Kentucky, funnily enough, back when I was in university. I was on a third-year geology field trip in Corbin, Kentucky to study sedimentary geological features. They’re kind of hard to study in Ontario, seeing as the last glaciation scraped most of them away, but there are some gorgeous sections to study down in Kentucky.

It was November, and starting to get chilly. We spent our day driving around in a bus, stopping along the highway to get out and look at the roadcuts. (Sedimentary rocks are arranged in layer-cake fashion, and the best place to look at the features is in a roadcut, where you are looking at a ‘slice’ through the rocks.) Just an aside here, Kentuckians must be the most friendly, helpful people I’ve ever met. Whenever drivers on the highway would see the bus pulled over and all of us out looking at the rocks, they would pull over and ask if we were OK and if we needed them to call us a tow truck.

At the end of the day we were chilled. I hadn’t packed a heavy enough jacket, thinking we were headed to the (almost) Deep South. We ended up at a restaurant after nightfall for dinner. We sat down and the waitress took our orders. I wanted to heat up fast, so I ordered a bowl of chili and tea, and then headed to the washroom to run some hot water over my icy hands, thinking of how hot and comforting the hot chili and tea would be, picturing steam coming out of the little steel teapot, the cup upside down next to it.

Imagine my surprise when I returned to the table to find that the waitress had already set my drink order on the table, and I was looking at a tall, frosty glass of iced tea. Iced tea! When the waitress came back, I apologised for the error, and told her that I had wanted a cup of tea, not a glass of iced tea. “Oh”, she said as she headed back to the kitchen, “you want hot tea.” Up here, ‘tea’ means a pot of steaming tea, and if you want it cold, you have to order iced tea. In Kentucky, it’s the exact opposite: ‘tea’ is iced tea, and if you want tea, you have to order ‘hot tea’. Weird, eh?

I guess that ‘eh’ is a giveaway that I’m Canadian. Though I don’t pronounce ‘about’ as ‘aboot’ as we are reputed to do. There are a few Canadian words or phrases that seem to confuse readers from other countries, so as a public service, I’ll use the rest of my time here on Alissa’s blog (and doesn’t she have the cutest accent?) to explain a few of the most questioned Canadianisms, in case you’ve ever wondered:

Loonie – A one-dollar coin with a picture of a loon on the tails side. We no longer have bills lower than five dollars.

Toonie – A two-dollar coin. Named because it’s worth two loonies.

Tim's, Timmie’s – Tim Horton's: a franchise of coffee shops selling the Canadian national food: the donut. Founded by Tim Horton, an National Hockey League player who played for almost 20 years for the Toronto Maple Leafs. They are everywhere in Canada.

Double double – When you’re at Timmie’s if you want your coffee with two cream and two sugar, you order a double double.

Eavestrough – I think it's called a gutter in the States, you know, the long things that are supposed to collect water from the roof and then send it down the rainspout, but all they really do is clog up with dead leaves?

I guess only a Canadian would understand this, “Excuse me, could you please pass me a serviette? I spilled my poutine on the chesterfield.” Only now, you all (y’all) do too! :-)
Posted by alison at 9/19/2011 8 comments:

Email ThisBlogThis!Share to TwitterShare to FacebookShare to Pinterest
Labels: Blog friends, Editor stuff, I am Canadian

Why the world needs translation editors 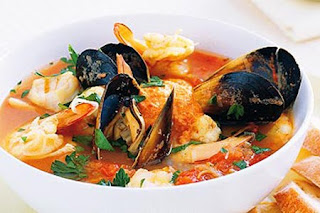 Or, why Google language tools are not always the best.

Many years ago, I had dinner with my father in a restaurant in the Queen Elizabeth Hotel in Montréal. I had bouillabaisse, a French fish stew that originated in Marseille. It was so delicious, I remembered that meal for years. So, when I Googled a recipe for it a few years ago, the first few pages returned were in French. I figured that a French recipe for a French dish would be the most authentic. However, I didn't read French that well back then, and hit the button on the page which translated the recipe into 'English'.

The translation was about as good as the English instructions for a Japanese VCR circa 1988. Here are some excerpts:

"Subtle dish with the many fish species which cook together to release us their different taste and particular perfume, to make a success of it it is essential to rigorously respect the order and the time of cooking of fish, if not parks with a pulp dull full with stop!"

Um, OK. I'll respect the cooking order. Because you know I don't want it to parks with a pulp dull full stop. That would be bad. I think.

"To make partly cooked, potatoes to the vapor, and to keep them with the heat. They will be cut in 4 sections each one and will be added during cooking. To put 8 semi hollow or hollow plates and a large hollow dish to heat."

Great! A chance to use the hollow plates. I hardly ever use those.

"In a pot, to make a bed with white onions thin slices, the crushed cloves of garlic, crushed tomatos, the bay tree, fennel and the bark of orange."

I'm not sure there's room enough in the pot for a bay tree.

"If need be, to add a little soup or water for just to cover fish, and to let cook 10 minutes. Your Bouillabaisse is ready to be useful, and like the soufflés, it could not wait."

I'm *so* glad the bouillabaisse is ready to be useful. Maybe it could vacuum the living room. Or fold some laundry.

I'm totally lost with this one. Not sure I want to eat rust. And the mayonnaise sounds kinda pushy, wanting its own way.