A conversation on the Promenade 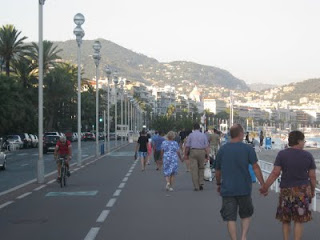 On the Promenade des Anglais.

Lise: How about "Bazinga".

The French sense of humour

We went walking this morning, my sister Lise, my dad and I, looking for a cheese shop. On the way we passed a small store that sells cosmetics: 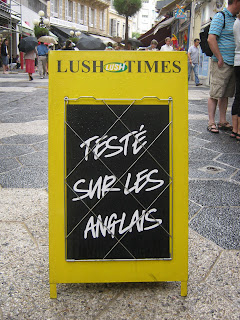 "Tested on the English"

I think that PETA would probably be OK with that.

Email ThisBlogThis!Share to TwitterShare to FacebookShare to Pinterest
Labels: Family time, Hey, I'm in France, It's all about me

And now for something completely different

A while back I did a recipe post on my blog. Now it's going to be a travel blog for a while. Why? Because I'm in France, and who knows when I'm going to have a chance like this again. So you're just going to have to put up with me chronicling two weeks of jealousy-inducing meals and trips and scenery, just because I can. Sorry.

Did I say France? I meant the South of France. Yes, I'm in Nice on the French Riviera, and really, now I know why rich and famous people move here. It's gorgeous. 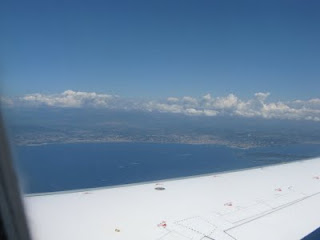 The trip, from Detroit, to Washington, to Munich and then to Nice, was very long, but the last leg, from Munich to Nice was when I met the first man of the trip. Instead of being seated next to my sister, I was next to a really good-looking man. He was olive-skinned and dark-haired, with huge brown eyes and long silky lashes and charming English. Unfortunately, he was also about 18, and spoke to me with all the polite respect that's usually reserved for the elderly. Sigh. I couldn't figure out his nationality: Italian? Spanish? French? Turns out he was Swedish. Go figure

We arrived in Nice about 2 p.m. local time and took a bus to our apartment. 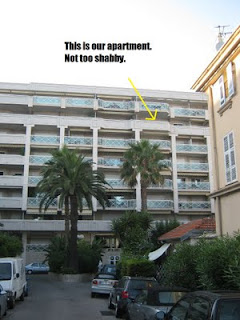 It's very nice and looks out over the Promenade des Anglais and the Mediterranean Sea. 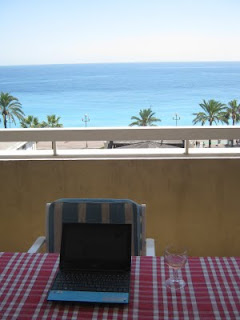 We had only been in the apartment (me, my dad, my sister and my stepmum) half an hour before the first bottle of rose was polished off. Life is good. 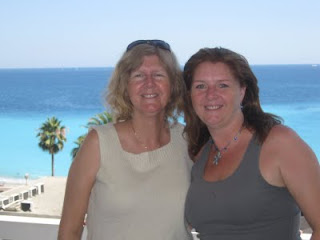 (We had been travelling for 16 hours when this was taken and well, we are kind of tired and it shows.)

Email ThisBlogThis!Share to TwitterShare to FacebookShare to Pinterest
Labels: Family time, Hey, I'm in France, It's all about me 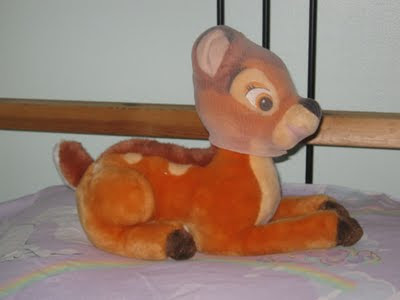 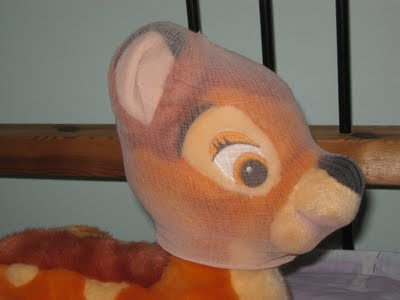