A bit scattered today, so bullets it is: 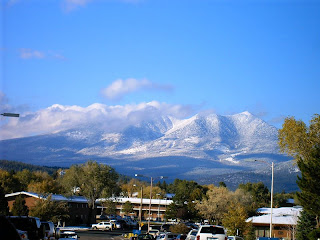 Bye bye folks, I'm getting up at an unspeakably early hour tomorrow morning and boarding a plane bound for Phoenix, Arizona. I'm staying overnight with my dad and stepmum and then driving north to Flagstaff (pictured above) for a conference where I will be very busy eating way too much attending sessions and drinking margaritas learning what's new in the world of digital editing, publication production and dissemination. 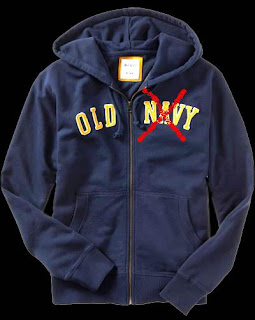 Rae (admiringly): Those are nice jeans.
Me (surprised and a bit flattered): Thanks, Rae. That's a nice thing to say.
Rae: Didja buy them at Old Lady?

Rae: You know, by the Disney Store?
Me: Oh, you mean Old Navy.
Rae: I thought it was called Old Lady.

"Damn you, Jim Butcher" and other stories

OK. Imagine that somehow Alice Cooper and Marilyn Manson had a love child. And that child had a raccoon. That raccoon? I look like that raccoon today. Large black circles under my eyes. I have not had enough sleep. And for that, I put the blame squarely on Jim Butcher.

It all started innocently enough last June. I was sitting in the living room of the large house that a bunch of us had rented in Niagara Falls, sipping wine and talking to the other parenting forum mommies who had travelled with their families from all over the US and Canada for a real-life get-together. I was listening to a conversation between Nikki from Calgary and Sara and Neil from Ohio about books -- SF mostly, which explains why I wasn't talking much. Once you get past Dune, I don't have much experience in that genre. The conversation turned animated when someone (can't remember who) asked someone else if they liked the Dresden Files by Jim Butcher. My ears pricked up when I heard the phrase "the only wizard who advertises in the Chicago yellow pages."

Fast-forward a couple of months and I'm poking around the library looking for something to read. I picked up Storm Front, the first of the Harry Dresden books. I liked it enough to request the second, Fool Moon. And I was hooked. Hooked, I tell you. Harry is a smart-ass PI who just happens to be able to deal with the occult as well as normal cases. You know, cheating husbands, demons, that sort of thing. The books are fast-paced, fun and funny. And I worked my way through them all.

Then he went and started another series, the Codex Alera, a fantasy series set in a world not unlike the Roman Empire in its politics, but different in that people have has some degree of command over elemental forces or spirits called furies. I put off reading it for ages, thinking it couldn't be as good as the Dresden Files. I was wrong. It's different -- high fantasy rather than urban fantasy, but enthralling.

I got the fourth book in the series, Captain's Fury, on Friday. I sat down with it at 8 a.m. in my pajamas with my Sunday morning coffee. I never got out of my pj's all day. I'm pretty sure I remembered to feed my kids (pretty sure -- I vaguely remember opening a package of hot dogs), but all other chores: lawn mowing, laundry, vacuuming, fell by the wayside. I was glued to the book. Monday morning I felt like it just wasn't fair that I had to, you know, go to work, instead of finding out what was going to happen. I finally finished the book at 2 a.m.

So. Me. This morning. Raccoon Girl. Yawning a lot. Way to make my life harder, Jim.

(And wouldn't you know it? I got a call from the library. Careless in Red is in. The book I've been waiting for 3 years for, to find out how Thomas Lynley is coping with the murder of his wife. Damn you too, Elizabeth George. Note to self: buy concealer.)
Posted by alison at 9/15/2008 10 comments:

Rachel has been getting a lot of play in my blog lately, so in the interests of fairness, I present a short film of Leah playing Rock Band on the Wii at our friends' place Labour Day weekend.

She *so* has my co-ordination.

Note: I love my kids. I respect them too, and their privacy and feelings, so if a picture or video or story about them appears on this blog, it's because I've asked them if I could post it, and they've said yes. (This morning I asked Leah if I could post her drumming video and she grinned her gap-toothed grin and said, "Cool.")
Posted by alison at 9/11/2008 12 comments:

Email ThisBlogThis!Share to TwitterShare to FacebookShare to Pinterest
Labels: Life with Leah

Not exactly how I pictured a princess... 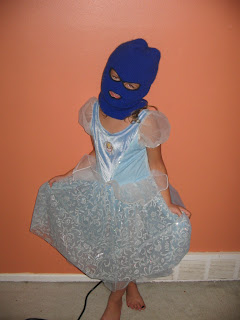 Cinderella falls on hard times and starts knocking over liquor stores.
Posted by alison at 9/10/2008 16 comments:

Who will be the Goblin King? 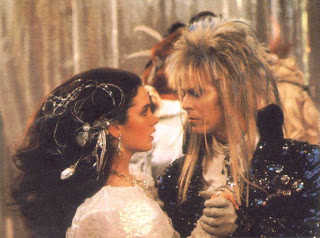 From my dreams last night:

Give me the child country.

Beware. I have been generous, up till now. I can be cruel.

Generous? What have you done that's generous?

*Everything*! Everything that you wanted I have done. You asked that the child be taken there be affordable national childcare. I took him I gave parents 100 bucks per kid under six per month. You cowered before me, I was frightening. I have reordered time. I have turned the world upside down (well, OK, I kinda reneged on that income trust thing, but what do you expect, I'm a goblin), and I have done it all for *you*! I am exhausted from living up to your expectations of me. Isn't that generous?

Let me rule you. I ask for so little. Just fear me, love me, do as I say and I will be your slave.

Through dangers untold and hardships unnumbered, I have fought my way here to the castle Prime Minister's Office beyond the to take back the child country that you have stolen. For my will is as strong as yours, and my kingdom is as great. You have no power over me. And seriously, does this look like October 2009 to you? Fixed election date? Please. Asshole.

Why these nightmares? Well, the writ dropped yesterday and it's election silly season north of the border now too. Oh yeah, and I watched Labyrinth three times over the weekend with the girls.

Email ThisBlogThis!Share to TwitterShare to FacebookShare to Pinterest
Labels: I am Canadian, Politics, Tee hee

How to Make Pole Dancers, or How I Spent My Labour Day Weekend

We have a tradition that the girls and I spend Labour Day weekend with friends south of Sudbury, where we used to live. We all gather at Lori's place (me and the girls, Lori and her family, Michelle and her family, and assorted others), unpack unseemly amounts of food, and free the children to run wild in a pack for the duration, unencumbered by enforced bedtimes or nightly baths. For them, it's hide and seek, catching frogs, Supermario Smash Bros. and Rock Band on the Wii, softball, swimming in the pool, ATV rides (slowly around the property with an adult), fishing, and bonfires. 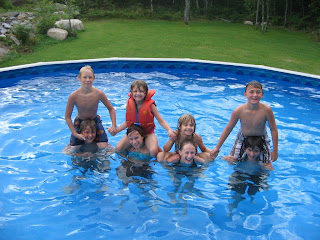 For the adults, it's all about reconnecting, eating, retro music on the crazy-loud sound system, drinking, bonfires, stargazing, laughing til you nearly pee your pants, eating, and drinking. And did I mention drinking? The drink of choice for the weekend (for those who could be enticed away from beer) was the Pole Dancer. And here's the recipe:

Mix liqueurs in tall glass, fill with ice and top up with Seven-Up. Squeeze lemon wedge into glass and then drop into glass. Tastes like a blue Mr. Freezie, but the lemon cuts the sweetness.

Drink two, and then decide that they take waaaaay too much time and concentration to assemble individually, and start making them by the pitcher: 6 oz Blue Curacao, 6 oz Raspberry Sourpuss, fill pitcher with Seven-Up. Stir. Clean up mess when mixture mysteriously foams up and over edge of pitcher. Squeeze lemon into glasses individually though.

Drink a couple more. Decide to play softball. Realize that you haven't held a bat nor run bases in 18 years. No matter, Pole Dancers confer the illusion of immortality, or at least softball competence. Grab a bat and swagger up to home plate. Talk some smack to the pitcher. Miss the first pitch. Hit a pretty decent grounder down the third base line on your second pitch. Start running to first. Take the time to reflect that if one is going to drink like a frat boy at age 44 after birthing two near-nine-pound, innard-stretching babies, one should probably pee before playing softball. Pole Dancers may confer illusions of competence, but continence is another matter entirely. Fortunately the next batter homers so you can walk carefully to home plate and excuse yourself to change your shorts. No one has noticed.

Arrange for the dads to take all children and dogs down to the hydro dam to go fishing. Mix up a new pitcher and bring a drink to each of the moms, who are officially off duty. Decide amongst yourselves that it would be relaxing to enjoy the Pole Dancers in the now kid-free pool. Try not to drown due to excessive laughing while trying to heave your bulk up onto an air mattress in the pool while under the influence. 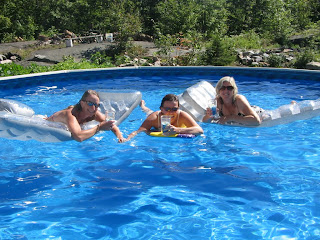