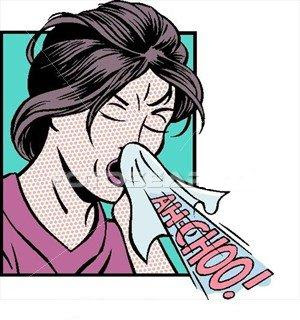 Silky undies with little or no coefficient of friction

Unintended partial striptease in the back yard
Posted by alison at 4/27/2010 17 comments:

Email ThisBlogThis!Share to TwitterShare to FacebookShare to Pinterest
Labels: Alison vs. the Universe, Tee hee

How to tell when you need glasses 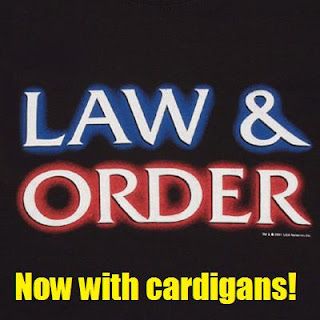 The girls and I headed over to the library on Thursday evening. Rachel needed a book for a book report due next week, and Leah and I had finished reading all our library books. I was in the children's section helping Rachel pick out a French book for her report and ended up standing next to the revolving rack that holds the VHS tapes and DVDs.

I glanced over at the rack and noticed two Law and Order tapes on the rack -- with the unmistakeable picture of Jerry Orbach on both spines. 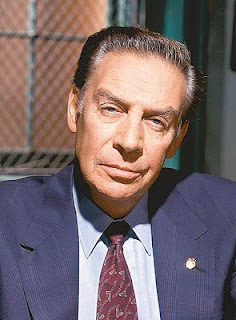 Hmmm, those seem to be shelved in the wrong place, I thought to myself. I better take them to the front desk and get them put back in the adult section. Or maybe I'lll check them out. I like the old Law and Order shows best, the ones with Jerry Orbach and Chris Noth before he became Mr. Big on Sex and the City. I picked the first one up and turned it over to see which episodes were on it. This is what I saw when I squinted at it: 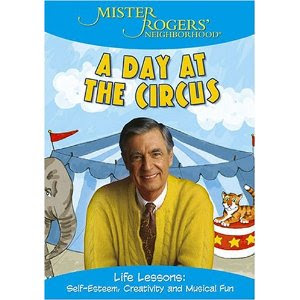 I'll be making an appointment with the optometrist on Monday.
Posted by alison at 4/17/2010 9 comments:

Why I don't ski

This is Ashleigh McIvor. She is a skier. 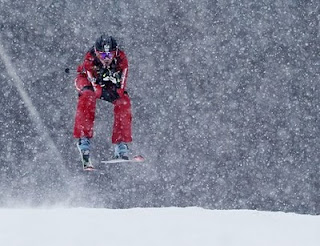 This is me (on the right -- just in case you thought I was one of the hot young things). I am not a skier. See the wineglass in my hand? Drinker, not skier. 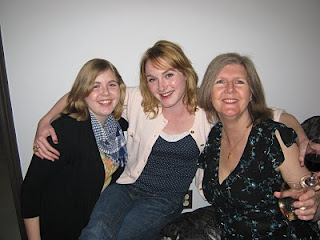 A month or so ago, Jen posted about her adventures in skiing. I laughed and laughed. And then I remembered why it is that I don't ski.

Growing up in Sault Ste. Marie, Ontario, I did a lot of cross-country skiing with my mum and sister: 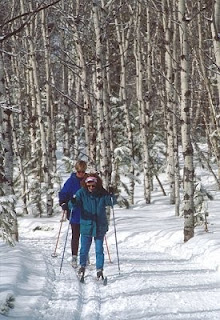 It was fun and good exercise and almost obscenely healthy, but not really that exciting.

While in high school, in Windsor, Ontario, I went on a class ski trip to Pine Knob, Michigan. I was a total newbie on rented skis. While my expert skier friends went off to more advanced slopes, I grimly headed to the bunny hill to teach myself to ski. It didn't start off very auspiciously. I watched the skiers ahead of me effortlessly grab the tow rope that led up the beginner hill, and ride it up to the top. ' Right. I can do this', I thought. I came up to the tow rope and grabbed on tightly, like I'd been told. My ski mitts were immediately ripped from my hands and thrown 10 metres uphill, while I stood there, not moving.

After several attempts and several mitt retrievals, I managed to get to the top of the bunny hill and began a slow snowplow downwards. I didn't fall more than 5 or 6 times on the first descent. And after snowplowing down a few more times more successfully, I decided that maybe going fast would be fun. So instead of angling my skis towards each other, I stood with them parallel, then crouched slightly and pushed off. I skied speedily down the bunny hill, past the chalet, into the parking lot and into the side of a Jeep Cherokee. 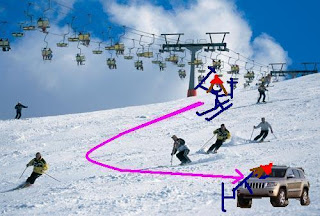 It was a number of years before I tried skiing again. Fast forward to the early nineties. I was living in Toronto, and a group from work organized a day trip to Holiday Valley in Ellicotville, NY. Several carloads were going and meeting there. So, at O dark thirty in the morning, I crawled into a car with my co-workers Dave (old university friend), Glenn, and a gorgeous, funny Aussie girl with dual citizenship (her parents were Canadian, but she'd been in Australia all her life). I can't remember her name for sure, but I think it was Jill.

The fun started at the border crossing into Buffalo. We pulled up to the guard kiosk, our ID at the ready, and when the surly male border officer asked our citizenships, Dave, the driver, answered "All Canadian". This was apparently not good enough for Mr. Officious. We each had to say our citizenship out loud. This is what followed:

He really didn't like that Jill had a Canadian passport and an Australian accent, but grudgingly had to accept it -- after doing everything but X-raying it to ensure it was legitimate.

When we arrived at Holiday Valley, I skied the bunny slopes with my friend Trudy, who had come in a different car. After a while doing that, I felt brave enough to graduate to the next level of slope, which necessitated taking the ski lift halfway up the hill. I was doing pretty well, but was skiing about as conservatively as I possibly could -- wide sweeping turns that were using the entire width of the slope each time -- you know, so I could avoid going faster than a brisk walk and peeing my pants in fear: 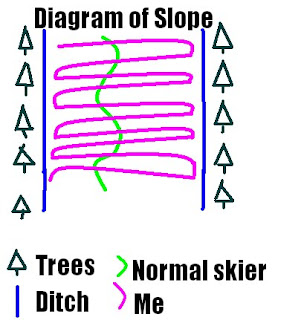 Trudy zipped down the slope, waiting patiently a few times for me to catch up, and after wasting spending a couple of hours hanging out with me, she left to ski some of the more advanced runs. I kept on keepin' on. Wide, snowplow-y turns taking me from ditch to ditch, seeing if I could ski very slowly without actually stopping (and keeping an eye out for Jeeps). It was the end of the afternoon and the light was starting to fade. It had begun to snow. And then, this one time (at band camp), I miscalculated and didn't make the turn in time.

I skied over the edge and tumbled into the ditch. I landed on my back with my feet further up the hill than my head. My butt broke through the ice covering the stream that was flowing down the ditch, and so I was lying there on the ice with my ass in the water, unable to get up. One of my poles was just out of reach, but the other was still strapped to my wrist. I lay there for a couple of minutes, in shock, but then the cold trickle of water soaking into my nether regions convinced me that I needed to do something soon. I struggled, but couldn't get up. With my remaining ski pole I stabbed ineffectually at the release mechanism, so I could get my skis off and get to my feet. But it was hard, trying to raise my head up and look uphill at my feet. In the snow and decreasing light.

And then I heard the first shout from above. "Are you OK????" I looked up. Yes, I had fallen in the ditch that was directly under the ski lift. The situation looked something like this, only I was lying in a stream, which is too hard to draw, even for someone with my amazing Microsoft Paint skills: 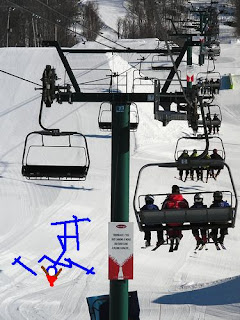 And so for the next 15 minutes, it went something like this:
I decided that I was finished skiing for the day. Or maybe for my lifetime. I'm thinking that maybe it's better that I don't ski again. I'd hate to be responsible for some poor family having photos like this of their ski trip: 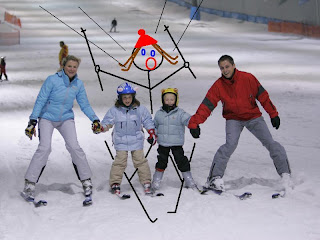 You know, when they get out of the hospital and have recovered enough to upload them.
Posted by alison at 4/14/2010 15 comments:

Email ThisBlogThis!Share to TwitterShare to FacebookShare to Pinterest
Labels: Adventures of Stick Alison, Alison vs. the Universe, It's all about me

Tim, or, A Girl and her Spider 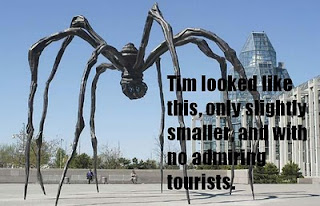 I don't think it has been a secret on this blog that I don't like spiders. I think I've made it clear once or twice before. But I'm trying really hard not to pass on my neuroses to my children. And I think it's working, because Leah adopted a spider in the basement and named him Tim.

Tim was a smallish black spider, just inside the size category that I'm OK with, who was sitting very still on a shiny white expanse of baseboard that showcased his blackness to full effect. Rae wanted to squash him, but Leah, my tender heart, rebelled. "I want him," she announced. "His name is Tim, and he's MY spider." Even Rae backed off when faced with this vehemence. Tim sat on his piece of baseboard for a while, and then wandered off to do whatever spiders do in recently renovated, hopefully bug-free basements. Leah was upset that he was gone, and responded only grudgingly to the logic that there wasn't a whole lot to do or to eat on the baseboard, and that Tim had probably gone looking for a meal.

The girls pulled out the barbies and set up a game on the basement floor. A few minutes later, I heard an excited cry of "Tim! Mummy, I found Tim!". I went downstairs to see an appreciably larger, grey spider, not at all in the size category that I'm comfortable with, on the floor. Leah was very happy. Me? Not so much. "Can I squish him?" Rachel asked hopefully. And while I secretly thought Rae's idea was aces, Leah's anguished cries quickly made me realize that I had to figure some way out of this mess that didn't involve squishing the new and improved Tim #2.

Leah had captured him with a sheet of paper and a plastic cup, but wanted to let him go to live in the basement. I had to think quickly. I pointed out that now the basement was finished and clean, there were no bugs for Tim to eat, plus, he was hard to see against the carpet and might accidentally get stepped on. If she really liked Tim, the best thing to do was to set him free outside where he could catch bugs to eat. 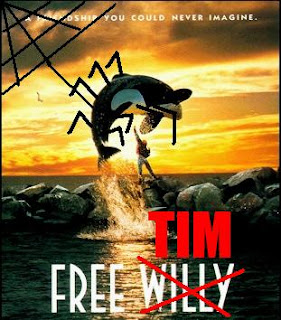 This did not go down well. There were tears and heartfelt declarations of affection for this new pet. Eventually, logic won out, and Tim was released into the wild out of the sliding glass doors at the back of the house, where he paused a moment and then disappeared down between the deck boards, where I hope he's living a life full of buggy deliciousness. Leah was inconsolable for 10 minutes or so, and then she and Rachel went out the front to ride their bikes on the driveway.

Leah came in all smiles a half hour later. "Guess what? I just saw Tim," she said. "He crossed the driveway while we were out there playing. Can you believe that he came all the way around the house just to see us?"