According to Rachel: election edition

This morning, getting ready for school/work. Leah and Rachel are giggling over something in the living room.

Me: What's so funny?

Leah: Never mind. Just something Rae and I were talking about.

Rae: Yeah, you're a grownup, you wouldn't get it.

Me: Hey, now you've gone and got me interested. I want to know what you were talking about. [mock threateningly] Tell me now!

Rae: Sometimes you won't tell us why you're laughing at something. You say that it's "not appropriate". I think you're being a hypocrite.

Me [impressed and amused]: Wow, that's a pretty big word, and you're using it right. I guess you could say I'm being a hypocrite.

Rae: Yeah, you are. And let me tell you, hypocrittery isn't nice at all.

Sadly, with the federal election campaign now in full swing, I think we're going to be exposed to a whole lot of hypocrittery between now and May 2.
Posted by alison at 3/30/2011 6 comments:

Email ThisBlogThis!Share to TwitterShare to FacebookShare to Pinterest
Labels: I am Canadian, Life with Rachel, Politics 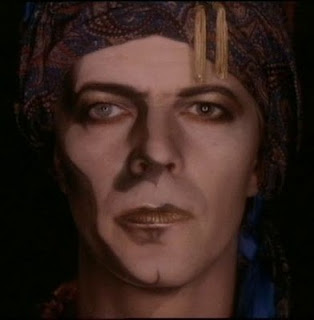 In the car on the way back from grocery shopping last night:

Rae: I heard a David Bowie song in the grocery store.

Me: Really? Which one.

Me: Hmmm. I'm not sure I know that one. Jean Genie?

Me: John, I'm only Dancing?

Getting our coats on in the front entryway this morning:

Rae: What's that song from Shrek?

Rae: The one about jumping up.

Rae: Yeah, about falling down and jumping up.

Me: Is it Tubthumping?

Leah goes by blasting Florence + the Machine's Dog Days are Over from her iPod touch, with no earphones so we all can enjoy it.

Rae: No, that's not it. It's about jumping, not drinking stuff.

Me: [singing again] "I get knocked down, but I get up again, you're never going to keep me down."

Rae: [sighs wearily] If you say so.

The thing is, I don't think that song was ever on a Shrek soundtrack, so I don't know which song she was actually thinking about. And really, I don't want to know.
Posted by alison at 3/29/2011 7 comments:

I can hear you all now, "Hey! This isn't a recipe blog!" And you're right, I usually post about things that Rachel says, or trips to the ER, or bacteria who use Facebook.

Some of you have been lucky enough to have had me make these for you, and some of you were offered demonstrations but were too hung over to get up and watch (I'm not naming names, but you know who you are :-)), and I've emailed the recipe to some of you, but I've never explained how to make cinnamon buns in excruciating detail before.

Well look no further. I'll walk you through it. All you need is a bread machine and the willingness to be worshipped like a goddess. (Or god, I'm all about equal opportunity.) Here's how you do it (recipe follows):

First of all, you put the ingredients in the bread machine: liquids first, then dry ingredients, finishing with the yeast and salt. One thing I learned about getting dough right in a breadmaker, whether it's for cinnamon buns or bread, is measuring the flour accurately. You have to stir the bread flour (not all-purpose flour) in the bag with a spoon to lighten it a bit, then spoon the flour into the measuring cup and level it off with a knife. Otherwise, if you just scoop it out and bang the measuring cup to settle the flour, you'll be using too much and have to add more water when it's kneading. Oh, and always use bread flour and bread machine yeast. It makes a difference.

Anyway, add the ingredients and set it to the dough cycle. When it's done, it will be silky and elastic and look like this: 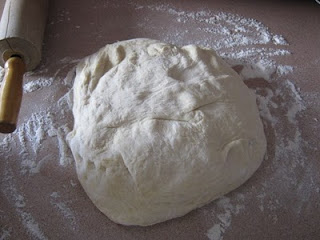 Roll it out into a rectangle. Use a fair amount of flour. (I took these photos during different cinnamon-bun-making events, so that's why you might notice the disappearing pastry mat. Funny story, I stored it behind the toaster oven and accidentally melted it one day when making a pizza.) 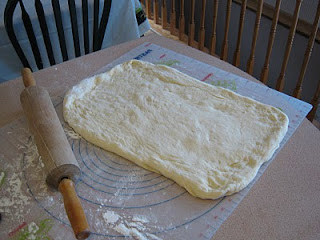 Now take a spatula and spread the softened butter all over the rolled-out dough, leaving one long edge without butter (for sealing it up): 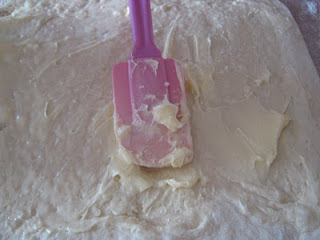 Now sprinkle the brown sugar/cinnamon mixture on top of the butter: 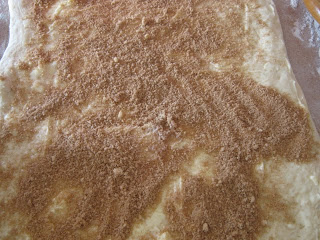 If you have helpers, this goes really quickly. Just make sure they wash their hands. 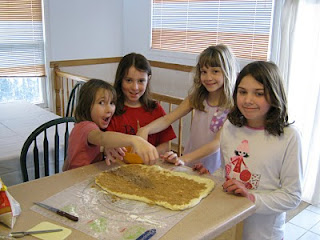 Once the brown sugar/cinnamon has been evenly spread, roll up along the long edge, starting with the edge that you *didn't* leave free of butter and sugar: 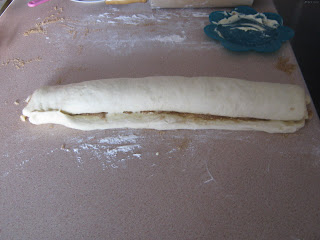 Pinch it shut along the edge that you left free of butter and sugar: 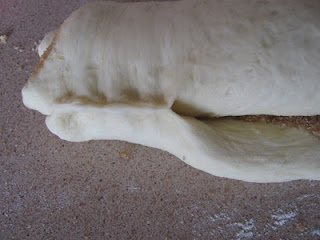 Roll it over until the seam is on the bottom: 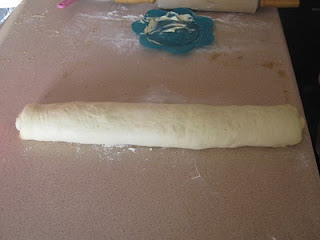 Now take a big, sharp knife, and cut the roll in half: 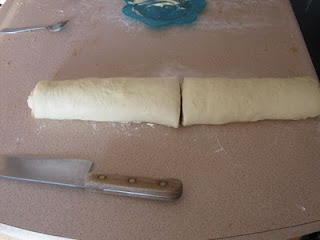 And then cut each half in half: 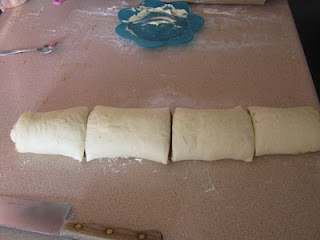 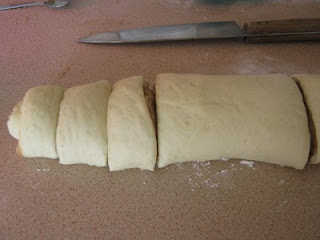 Place them on a lightly greased cookie sheet. They'll be small and won't touch each other: 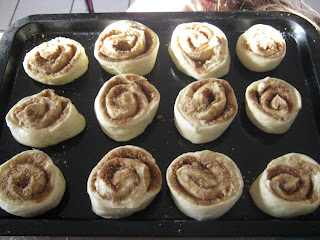 Now spray some plastic wrap with a little spray oil and cover the cookie sheet. Child head is optional. I used to use a tea towel, but I got tired of having butter-stained tea towels. But you can use one if you want. 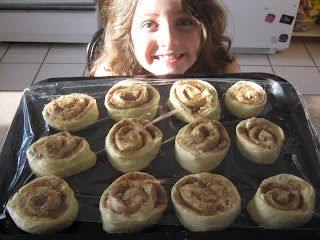 Leave in a warm place to rise, about 30-40 minutes. Now they'll be touching each other: 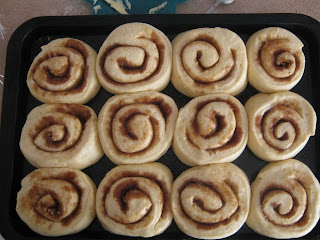 Now into a preheated oven and bake them. I once went through all the steps up until this point and was too impatient to wait until the little light on the oven went off, indicating that the oven had hit the right temp, and I burned the tops of the rolls. It was horrible. I cried. And then I ate them anyway. They're *that* good. So be sure the oven is ready and the top element isn't still on trying to heat up the oven. Mmmmmmm. Don't they look GREAT?: 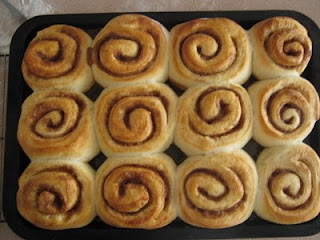 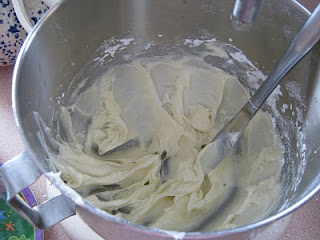 Now spread a little or a lot of icing onto a warm roll, inhale the cinnamon-vanilla fragrance, and wallow in a piece of home-made heaven. 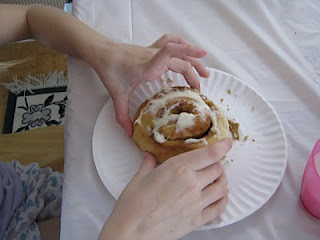 Five out of five sleepover party guests think these are the best cinnamon buns ever. 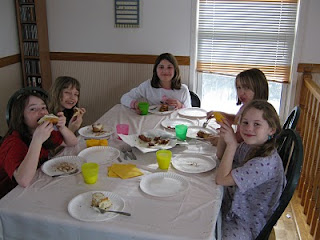 Cinnamon Rolls for the bread maker

Rolls : Place ingredients in the machine following manufacturer's instructions and set for dough cycle. Wet ingredients first, then flour, sugar and pudding mix. Make 2 little wells in the flour with your finger or a spoon and put the salt in one and the yeast in the other. Start the dough cycle. After completion of cycle, remove from machine and roll out to 17x10-inch rectangle.
Filling: Mix together brown sugar and cinnamon. Spread softened butter over dough and sprinkle brown sugar/cinnamon mixture over the top. Roll tightly from long end, pinching edges closed when finished. Slice into sizes of your choice (I usually get 12 rolls from this). Place on greased cookie sheet and let rise until doubled in size . Cover with a slightly damp tea towel and put somewhere warm and not drafty. (I usually turn the oven on to 150F, let it warm up, then turn the oven off and put the pan in there to rise with the oven door open about 1/4 of the way.) Rising should take about 35 to 40 minutes.
Bake at 350°F for 12 -18 minutes, until light golden- DO NOT OVERBAKE! <- Keep an eye on them because mine were done in 12 mins, but my oven runs hot . You want them not too hard, but soft and yummy. Golden on the top, but whitish where they touch each other.
Frosting: Mix together and spread over warm rolls. You'll need a spatula to get them out of the pan -- some of the butter and sugar filling leaks down and caramelizes on the bottom of the rolls and they sometimes stick to the pan even though you greased it. Enjoy!
Posted by alison at 3/14/2011 17 comments:

Email ThisBlogThis!Share to TwitterShare to FacebookShare to Pinterest
Labels: Life in general 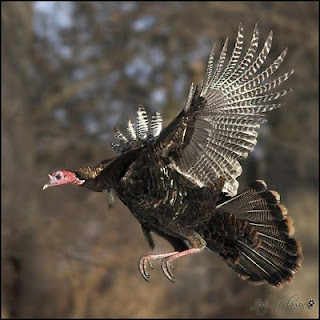 Email ThisBlogThis!Share to TwitterShare to FacebookShare to Pinterest
Labels: It's all about me, We kind of live in the country - near cows and wildlife and stuff 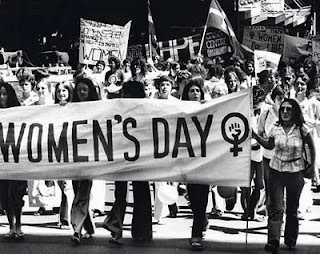 We have a little ritual that we do when we leave the house for the day, heading for school and work. First, we tell the cats to behave themselves while we're gone: "Be good. No smoking. No making french fries." And then as we go through the front door, I always say, "Let's go conquer the world!"

Today is the 100th anniversary of International Women's Day, so I decided to switch it up a bit. I told the girls that I wanted them to go out and kick some butt and show everyone what super amazing women they are. (And then I had to explain the word 'metaphorically' to Rachel.)