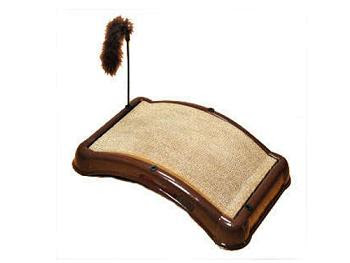 and you set it up next to the chair that the cats like to scratch, in order to entice them into scratching something other than the chair (classic transference theory) 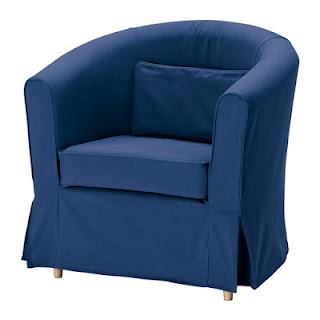 and the cats totally ignore it for three days and then start to use it -- to stand on to give them a better vantage point for shredding the chair. 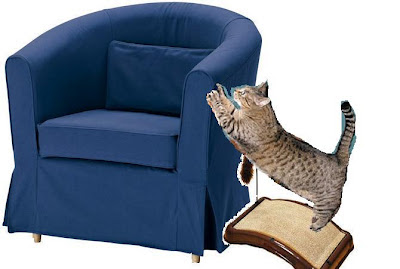 It's hard being the less intelligent species in the house.
Posted by alison at 6/23/2012 13 comments:

Email ThisBlogThis!Share to TwitterShare to FacebookShare to Pinterest
Labels: Alison vs. the Universe, The cat's got my tongue

Even extroverts get nervous 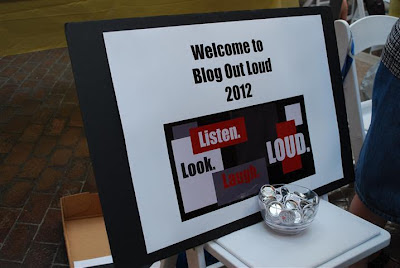 I am not what you'd call shy.  And I can back that up with proof.  Anecdotal, but proof nonetheless.

One time, Evelyn (BFF) and I were en route to a conference in Colorado. We were at the Denver International Airport, waiting for a shuttle to take us the rest of the way to Boulder.  The airport was over-airconditioned and we went outside so that I could warm up and BFF could have a cigarette.  A little ways down the walkway, a well-dressed man was sitting on the sidewalk, his back against the wall of the airport, and next to him was the largest dog crate I had ever seen.  It was the kind with opaque plastic walls on all sides except for a wire mesh door.  Try as I might, I couldn't tell what kind of dog was inside there. All I could tell from the movement I could see through the thin slots in the plastic walls was that it was big.  Really big. My curiosity got the better of me, and I walked over and started a conversation with the man, and asked him what kind of dog was in the crate.

It turns out it wasn't a dog at all.  It was a goat.  A prize-winning stud goat.  (And just to clear things up, contrary to the story that BFF tells everyone about this incident, I did not start my conversation with the man in the suit by saying, "Nice goat, mister.")  But I did chat with him a while, much to BFF's consternation, I think she was worried that he might taser me and throw me into the crate with the goat and then load the crate into a white cargo van with no distinguishing characteristics because really, can you trust a man in a nice suit who sits on the sidewalk and, you know, TRAVELS WITH A GOAT?)  He was actually very interesting, and told me how the goat was being shipped to California to mate with another prize-winning lady goat.  We said goodbye a few minutes later to BFF's obvious relief when the shuttle bus arrived.

In later years I wondered why he didn't just freeze the goat semen and ship it Fedex to Cali, but he didn't, and now I have this great anecdote, and, as an added bonus, will probably see "frozen goat semen" show up as a search string for hits on my blog, which will totally reaffirm my belief in the weirdness of the Internet.  But I think this kind of illustrates that I am not shy.

Blog Out Loud Ottawa was a wonderful event, and I had so much fun.  It was held at the Arrow and Loon and as soon as I saw all the people gathered there to hear the talks, I started to get nervous. 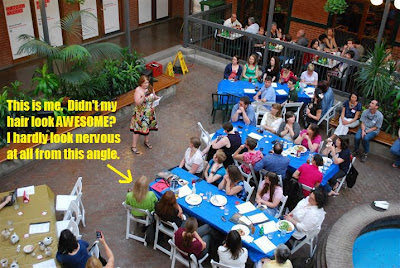 But I had my posse with me (and I mean 'posse' in the old, Western sense, not 'posse' the hip, urban sense, because that would just be so not me.) Becca, Debby, and Kate came out to support me. Behind them you can see all the other people who weren't visible in the first picture.  All those people made me very nervous. 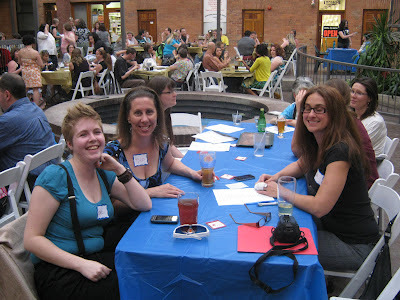 Kate tried to distract me by taking our picture together with my camera.  I have never been successful at this, but at least I wasn't making a duck face. 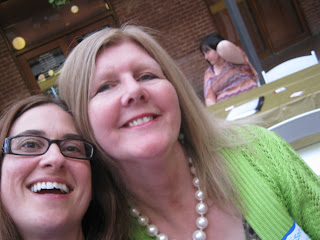 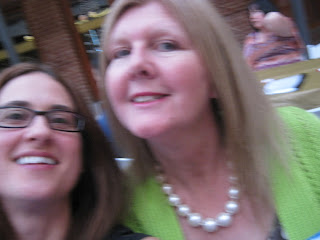 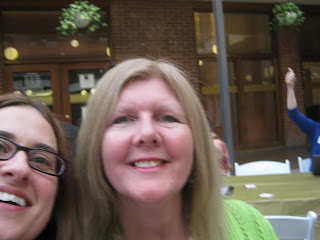 Once the talks started, I was mesmerized by the stories.  Some were funny, some sad, some uplifting.  Some had us all laughing and some had us choked up.  The talent on offer that night was amazing.

My palms grew damp.  I was very, uncharacteristically, quiet.  Lynn, who organized the event, came over and asked if I would mind being bumped to later in the agenda.  I said not at all, happy for the short reprieve, and doubly happy not to follow this post, which was hilarious.

But eventually the time came, and this very, very nervous extrovert came up to the front.  I was actually amazed that the mic didn't pick up how hard my heart was pounding or the rattle of the paper in my hands.  I began speaking, and it was OK.  The nervousness seemed to float away.  I was actually enjoying myself. 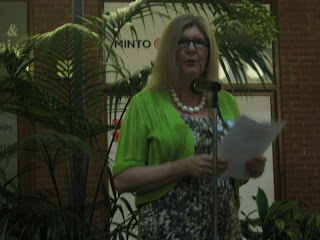 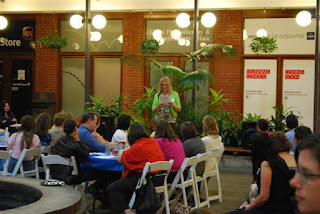 And everyone laughed where they were supposed to.  And everyone clapped at the end, even though I forgot to say 'thank you' when I was finished.

It was scary, and liberating, and fun.

Thanks so much, Lynn, I hope to be able to do it again next year.

I hope the prison they end up in is close to home. You know, to make the visiting easier.

Leah walks past me carrying several baby dolls that haven't been played with in a long time, two balls of yarn, and a roll of duct tape.  I can hear Rae in the basement moving furniture around.

Me [sighing heavily]: "I'm going to the liquor store."

Email ThisBlogThis!Share to TwitterShare to FacebookShare to Pinterest
Labels: Life with Leah 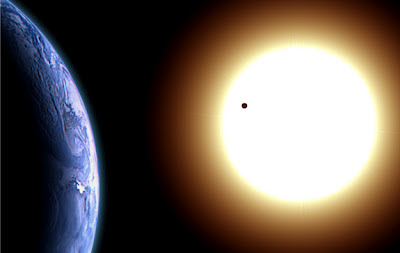 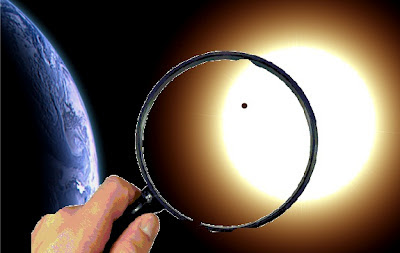 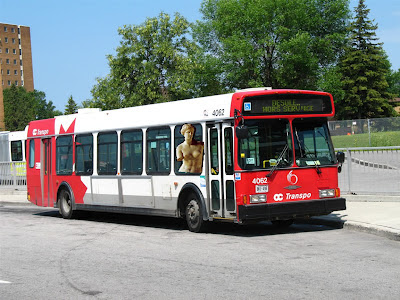 You want me to do what?


Warning: graphic content.  I will be talking about poop and punctuation.  I don't know which is more icky.

There comes a time in everyone's life when their doctor wants to talk about body parts that we really don't want to discuss.  Listen, as far as I'm concerned, a colon is a punctuation mark -- two little dots that are used after a word introducing a quotation, an explanation, a description, an example, or a series, and often after the salutation of a business letter.  My doctor begs to differ.

Since I am nearing 50 it's time to screen for colon cancer. I need a FOBT, the doctor said: a blood test.  [Hey look, I just used a colon in the syntactical-descriptive sense.  Sorry.  Grammar geek. Moving on...] But it isn't really a blood test, it doesn't test for something in your blood.  You don't go tripping happily down to the lab to get a vial or two drawn.  It's a test to detect the presence of blood in something else.  What, you ask? (But only if you're really dense, otherwise you've already figured it out.  Here's a hint:) 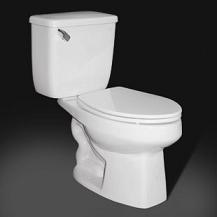 Yes, the F in FOBT stands for 'fecal'

The O in FOBT stands for 'occult' (occult?!?!), which made me wonder if I am I supposed to draw a pentagram around the toilet and hang a goat skull from the wall while wearing a black robe. 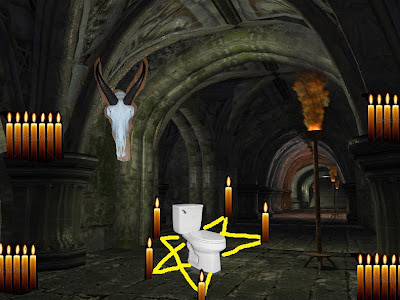 Because I totally will if I have to.


(Note to self: check out Kijiji Ottawa for goat skulls.)

But I digress.  FOBT stands for fecal occult blood test.  The doctor gave me a kit with three cardboard slides with flaps that you open, and applicators that look like anorexic popsicle sticks to, you know, spread some, um, 'sample' on the slides.  You do that and then you close up the flaps and put the slides in the special plastic envelope and take it back to the doctor's office for them to send to the lab.

(I'm very glad that I don't work in the lab and have a job description that includes "Opening special plastic envelopes, removing cardboard slides, and opening up the flaps." Because, ewwww. )

But wait, that's not all.  There is a diet to be followed before one can start this whole process: generous amounts of cooked and raw vegetables, plenty of fruits, and moderate amounts of high-fibre foods.  Well, that makes sense.

There is also a kind of bewildering list of things one must not eat: turnips, broccoli, horseradish, cantaloupe, parsnips, radishes, and cauliflower.  These foods contain chemicals that can result in false positives or false negatives.

It's a good thing that red wine isn't on that list.  Because in order to do this I'm going to need lots.

Email ThisBlogThis!Share to TwitterShare to FacebookShare to Pinterest
Labels: Alison vs. the Universe, It's all about me
Newer Posts Older Posts Home
Subscribe to: Posts (Atom)