OK, so I'm slammed at work and due to an even-more-amazing-than-anticipated Labour Day weekend bash just south of Sudbury, I have several fewer brain cells than I did when I left Ottawa on Friday morning. (Damn Blue Drinks -- they're evil I say. Evil. But yummy.) And so, without further ado, for your viewing pleasure, a selection of the finest memes I could steal from my bloggy friends:

1. This first one's from Meanoldmommy, a music meme, which is very apropos since a large proportion of the time and effort expended on the weekend involved music -- from the host who couldn't get going in the morning without his coffee and the Chili Peppers "Especially in Michigan", the wild dancing to Teenage Head, Forgotten Rebels and even KC and the Sunshine Band, and one pinch-hitting DJ who kept putting on the Doors Greatest Hits whenever he took over:

What’s your ringtone? "Talk" by Coldplay (Geddit? Talk? Yeah, I crack myself up sometimes).

What’s the most incongruous song on your mp3 player? (blushing and looking away) probably a tie between Rod Stewart's "Do You Think I'm Sexy?" or, well, Tom Jones doing Prince's "Kiss" (Total cheese, I know. I can't believe it either. Don't judge me).

What is the one genre of music you cannot stand? Country. Or Country and Western. Or Western. Or whatever. You get the picture. If it has the slightest hint of a twang or those cutesy lyrics, I ain't interested.

Do you play a musical instrument? Nope.

One song that you think everyone should read the lyrics of: "Sympathy for the Devil", the Stones

Is downloading music for free a sin? Not sure.

Do you karaoke? Well....not as a rule. Apparently there is blackmail video of me and my sister-in-law singing karaoke after our neice's wedding reception, but as long as I haven't seen it, I can pretend it doesn't exist. I have only the sketchiest of memories of doing it (open bar at wedding. Say no more).

One musician you would happily whore yourself to: Robert Palmer, except he's, you know, dead, which might spoil the experience somewhat.

First album you ever bought: soundtrack to Saturday Night Fever (I was what, 10? 11?)

Most recent album you bought: KT Tunstall, "Eye to the Telescope"(<-actually bought; my most recent fave that my friend Becca gave me is Keane, "Hopes and Fears" A.Ma.Zing).

Favorite Beatles song (oh come on, everyone has one): Back in the USSR

One song that represents your 20s: "I Want you to Want Me", Cheap Trick

One song that represents where you are right now: "Smile", Lily Allen

One song that represents your blog: "Bitch" by Meredith Brooks (cause my blog can't make up its mind what it wants to be -- it's a bunch of different things)

2. The second is a book theme that I pinched from Dani at Postcards from the Mothership. And it's eerie how it turned out. This has been one of my very favourite books since childhood, and I reread it every 5 years or so. 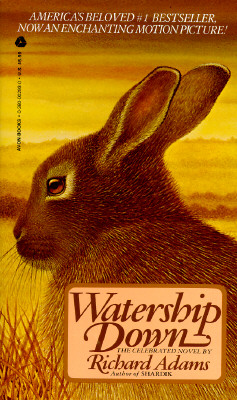 Though many think of you as a bit young, even childish, you're
actually incredibly deep and complex. You show people the need to rethink their
assumptions, and confront them on everything from how they think to where they
build their houses. You might be one of the greatest people of all time. You'd
be recognized as such if you weren't always talking about talking rabbits.


Take the Book Quiz
at the Blue Pyramid.

3. And, finally, an abbreviated, bullet point (in interests of saving time) version of the 'Eight things about me' meme that Dani tagged me with ages ago:

Eight things about me

1. I hate the taste of black licorice or aniseed. One time, I thought I could get over the aversion, and I drank several shots of Sambuca. It was not pretty, and I hate the taste more than ever since then.

2. I'm very easily distracted. My friend Ev makes fun of me by looking upwards and pawing at the air like a cat playing with a dangling string and saying "Oooo, look, something shiny!". I'd be insulted, but she has a point. This morning I was distracted by my own toes. I was wearing my favourite sandals and my eyes were caught by the lilac metal toenail polish I was wearing as I walked from my car to my office. I tripped on the curb.

4. I can't go to sleep at night unless the sheets are all tucked in.

5. I think that there's no such thing as too much garlic.

9. My favourite author at the moment is Iain Banks. But his straight literary novels, not his SF novels, which are published under the name Iain M. Banks. (See, it was supposed to be 8 things, and I got distracted)
Posted by alison at 8/28/2007 6 comments:

Email ThisBlogThis!Share to TwitterShare to FacebookShare to Pinterest
Labels: It's all about me, Memes

Overheard in the bathroom

Discussing their day at daycare while brushing teeth...

Rachel: Then Evan threw the truck and it hit Wyatt in the balls.

Leah: You mean the peepee spot?

Rachel: I mean the penis. Boys have penises, right Mom?

Leah: I wonder why they sometimes call penises "balls" and "nuts"?

Rachel [reflectively, scrubbing at a back molar]: I don't know.

Leah: Maybe because a penis is as long as a few tennis balls?

Alison [glad to have a toothbrush in her mouth to stop her having to answer]: Snorts with toothpastey laughter.


I've always made it a point to use the correct terminology when talking about body parts with the girls. It just makes sense to me. I don't want one of my daughters, at age 23, sitting on the table in the gynie's office saying "I think there's something wrong down there." If you know the right names for parts of your own body, it's empowering, and if you use them from a young age, then those words don't sound so embarrassing in your mouth when you have to use them later in life. My girls know that girls have vaginas and boys have penises. But I didn't think I'd have to explain testicles. At least, not yet.

Email ThisBlogThis!Share to TwitterShare to FacebookShare to Pinterest
Labels: Family time, Life in general, Life with Leah, Life with Rachel

What I did on the weekend

Well, I drove 917.31 miles (thanks, Mapquest, for the exact number) from Dartmouth, Nova Scotia to just west of Ottawa, Ontario. With a detour to Shediac, New Brunswick to find a beach with shells, since we didn't find any at the beach on the Atlantic Ocean. (I guess all the clams were vacationing someplace else. Alberta, maybe?) In an oldish car that makes a lot of funny noises. With two little girls, a portable DVD player, some dollar-store knock-off "Where's Waldo?" books ("Where's Donald?" and "Where's Frankie?" -- seriously, I couldn't make this stuff up if I tried), 4 stuffed animals, assorted Barbies, 2 blankies, a cooler full of drink boxes and cheese, 2 boogie boards, lots of luggage, and a driver with a bad case of seafood overload indigestion.

We left Saturday morning, spent Saturday night in Woodstock, NB where I had an interesting conversation with a 19-year-old waitress who referred to pretty well every inanimate object/geographic entity as "she" -- "Woodstock, she's a pretty small town. Now, Prince Edward Island, she's beautiful, you really ought to go." Not that I was complaining; she was interesting to talk to, and our dinner of pepperoni pizza, garlic fingers, two cans of Orange Crush, and 2 beers for me came to less than $20.

Sunday morning we set out at 7:30 and made good time through the rest of New Brunswick and Quebec until we got to Montreal, where, inexplicably, we hit a traffic jam. At five freaking thirty on a Sunday afternoon. What gives? The highways through Montreal are all twisty and snaky, and they don't seem to have been resurfaced since the Trudeau years -- they're mostly potholes strung together with rebar and chewing gum. Oh, and apparently, Montreal drivers think turn signals are for pussies. There I was, hurtling along at 120 (km not miles) trying to find my highway exit and 2 different cars wedged themselves into my lane in front of me, one from each side, at the same time, and neither of them signaled. I nearly had an accident. Of more than one kind.

The vacation itself was great. Visiting an old friend is a fun thing to do, especially when she's an amazing hostess. Evelyn took us to Queensland beach and we watched our kids play in the sand and ride their boogie boards in with the waves. We took the ferry to Halifax and watched magicians at the International Busker Festival and had nachos and beer at a restaurant on the pier while sailing ships sailed past and the fog came in.

One afternoon, Ev and I spent an hour or two with about 2 pounds of breaded clam strips and a deep fryer. It wasn't a pretty sight. But it was good. Once the kids were in bed, we drank wine and talked and laughed and almost (just almost, mind you) broke the cardinal rule that merlot and e-mail don't mix. Fortunately, we were in enough posession of our faculties that no exes were e-mailed, no matter how good an idea it seemed at the time.

It was fun, and worth the drive, but I'm not in a hurry to do another road trip any time soon.

Oh. Wait. The annual Labour Day bash at the Churchill's in Sudbury is coming up soon. 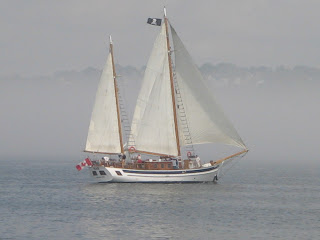 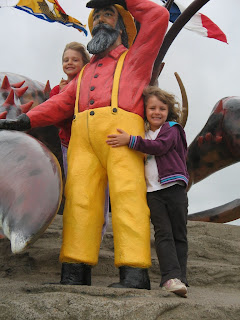 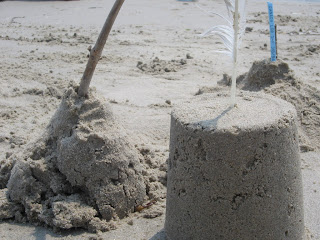 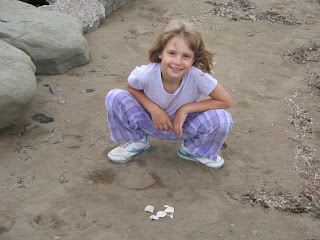 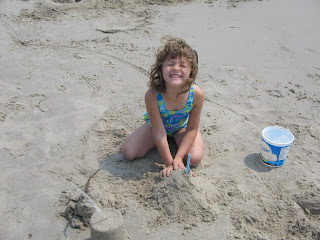 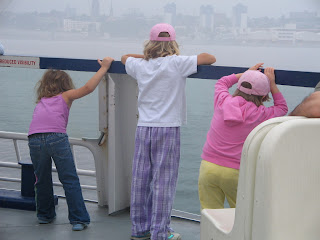 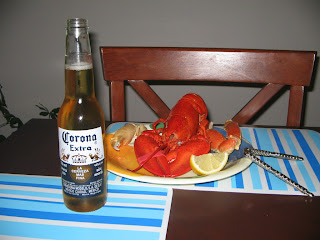 Everyone else is doing it

I'm so stealing this idea since I'm leaving at 4 a.m. (yes, you read it right, 4 a.m.) tomorrow to drive with the girls to Dartmouth, Nova Scotia. It's a two-day drive. Pray for me. So here are a few bullet points to serve as blog fodder for the next 10 days while I'm away. 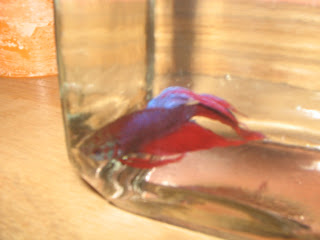 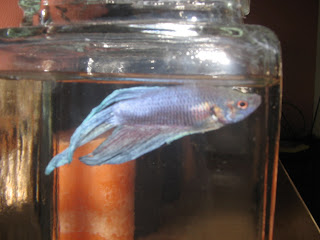 No frogs were harmed during the making of this motion picture

We spent last Sunday up at my cousin's cottage near Bouchette, Quebec. 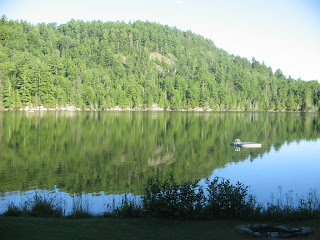 It was a gorgeous sunny day and the lake was full of frogs and gigantic tadpoles in all stages of metamorphosis. 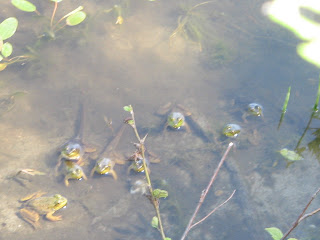 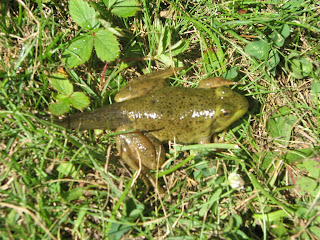 Leah and Rachel thought this was the Coolest. Thing. Ever. 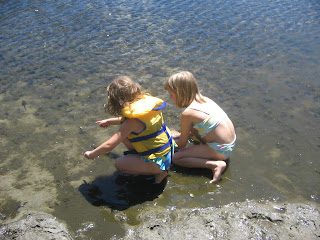 They spent a good 4 hours catching frogs and keeping them as prisoners guests at the Frog Hotel, a little lagoon they dug out at the water's edge. Rachel was the head warden concierge at the hotel, while Leah was rounding up guests.

Some of the frogs were less than thrilled with the accomodations and had ideas of their own, despite Rachel keeping an eye on things, as you can see here: