Why the world needs translation editors: "But sometimes the mistakes make me happy, especially when I'm drinking beer with lunch" edition 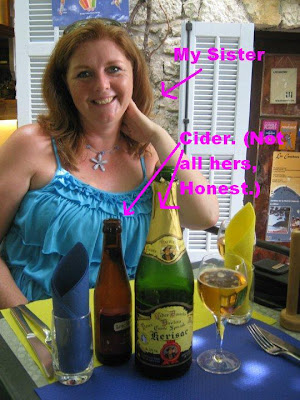 I was looking through my photos from France this summer, looking for a suitable profile picture for Facebook, and man, I took a lot of pictures of us sitting around tables eating and drinking. 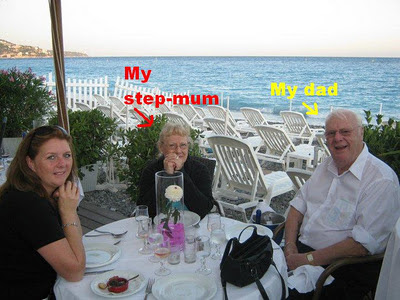 I found a couple of photos that I took of not-quite-right translations that I found in menus. (I warned you that you'd be hearing about my trip to France for way longer than you were going to want to.  Promise kept.)

The first one was from the Restaurant L'estragon in Monaco-Ville, Monaco, where we stopped for lunch: 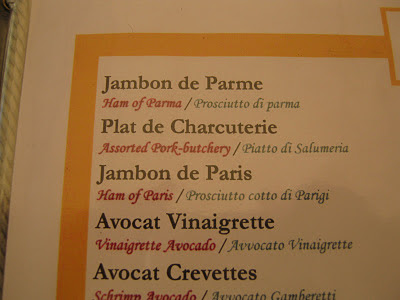 I'm sure that they meant this: 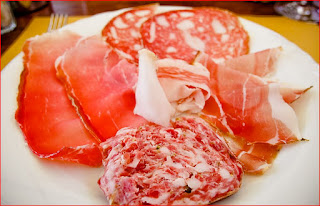 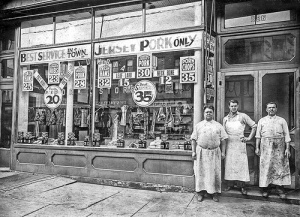 It might be kind of hard to bring an entire butchery to the table. At any rate, none of us were brave or curious enough to order the butchery -- we settled for warm goat-cheese salads and omelettes. 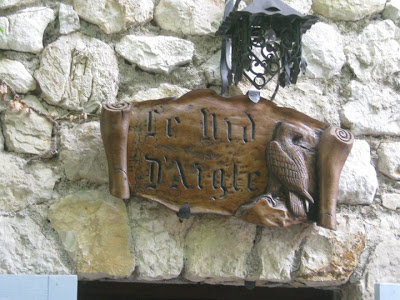 Then there was this, on the menu at the Nid d'Aigle in Eze village: 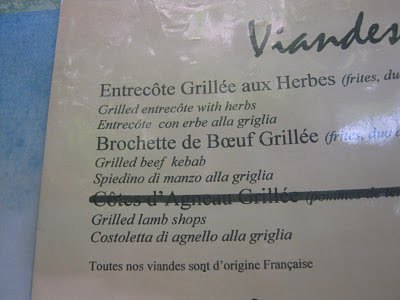 "Grilled Lamb Shops"
Again, I'm sure they meant this: 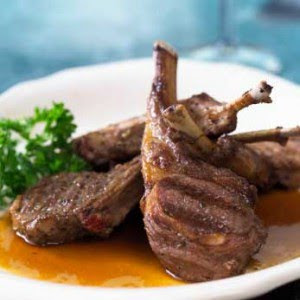 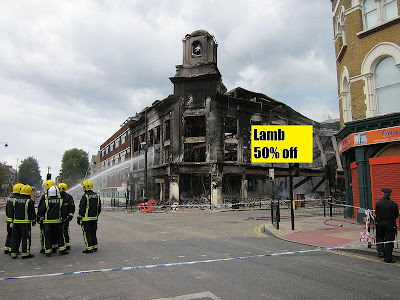 I ended up ordering this: 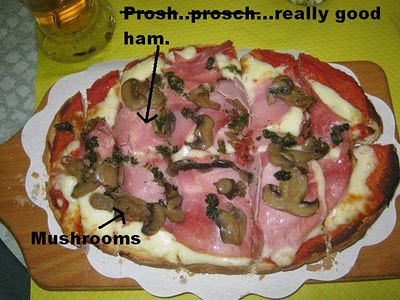 and two of these: 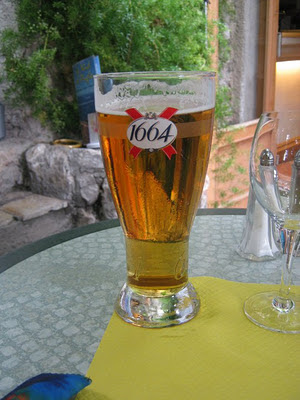 Things we made at our house yesterday 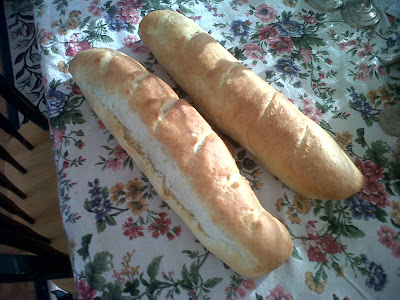 Lemon meringue pies (which had a bit of a sliding accident in the oven): 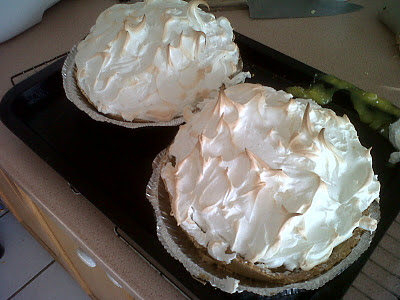 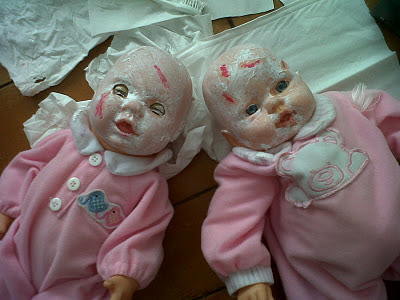 The best way to serve haggis 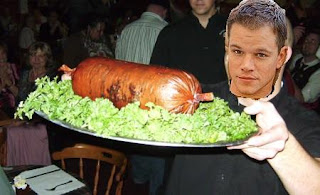 This is especially for you, Jen. Oh, and for Lynda too, who will be dining tonight on haggis nachos. Which, as we all know, is the second-best way to serve haggis. :)

All right, Mr. DeMille, I'm ready for my close-up 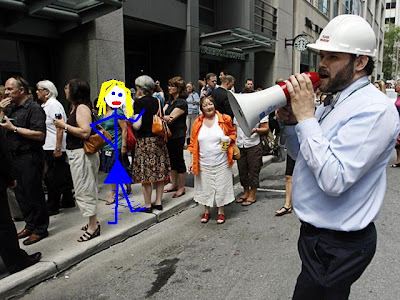 My friend Jen put up an interesting post a couple of weeks ago about self-image and photographs. Here is some of it:

I have to admit, however, that your comments made me sad because, for the most part, we women (no men commented) do not like how we look in photos. Like, we really don’t like photos of ourselves. Many of you even shared your tricks yourselves look thinner or taller or just disappear altogether (e.g. hiding behind children) in photos.

I blame Hollywood and the glossy magazine industry for giving us unrealistic expectations of what we should look like. There are no perfect bodies or perfectly beautiful faces. We are all beautiful in our own way and I’m sad that, while we can easily see other women’s beauty, we don’t look in the mirror and see our own.

As we approach the holiday season, I’d like to encourage you all to make sure that you get some photos of yourself, either alone or with your family. Don’t hide behind your children or a big dog or your Christmas tree. Just stand tall and proud and revel in your beauty. Enjoy the moment and laugh. Remember that you’re capturing memories that your family will enjoy for a long time.....

If there’s interest among you, I’d love to do a post in January of your photos and share with the world (okay, a very small slice of the world) just how lovely we all are."

"...Some pictures that have been taken of me are better than others, but we are always our own worst critics and cringe from photos that others find fine or even flattering. So, unless I’ve been caught with my mouth open, or my eyes shut, or a really stupid look on my face, I’m fine with posting them. It’s what I look like, after all."

We really are our own worst enemies. Mostly, I like the way I look. Without makeup or with, this is me. (Or sometimes a stick figure representation.) So, as challenged by Jen, here are some pix of me. Flattering or not, they are me and I'm OK with that: 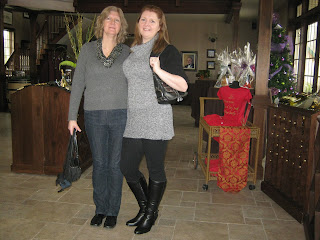 This is me with my sister, Lise, taken during a winery tour in early December.  We are gorgeous broads! 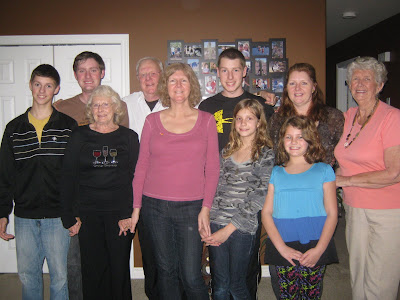 Here I am with my family, flour on my pants and stickers (courtesy of Rachel) on my shirt.  I am not a tiny woman, lol.  Also, no makeup.  I am a shiny-faced woman. 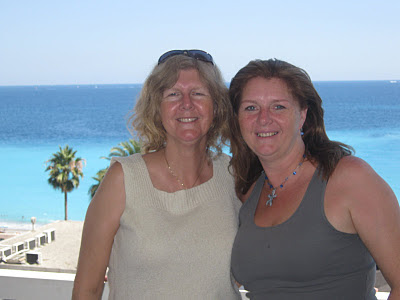 Here I am, again with my sis, on the balcony of the condo we rented in Nice, France last summer, makeup free and jetlagged after 16 hours of travel.  I don't know where my eyes were in this picture. I might have left them on the plane. 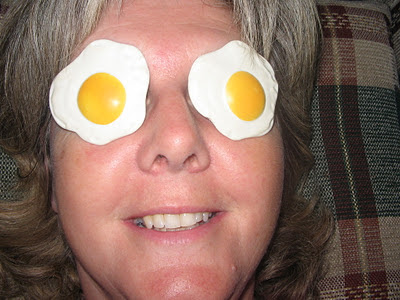 And going from no eyes to really big, scary ones, here I am back in 2007, taking pictures to amuse my chicken-pox-ridden kids. 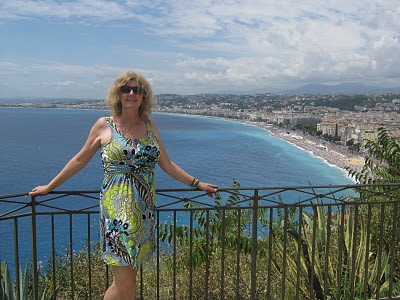 And finally (admit it, you're relieved I'm stopping now and therefore I'm not totally self-involved and exhibitionistic), here is my favourite picture of me.  Ever.  Or at least since I was three.
Posted by alison at 1/13/2012 8 comments: 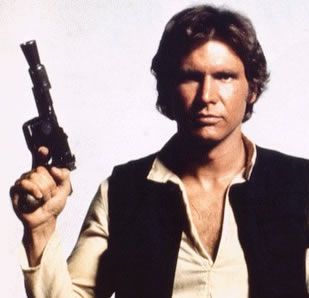 Someone in the office is making laser gun noises.

I am not going to roll out of my chair, grab my (imaginary) Jedi light sabre and use the Force to levitate me over the cubicle wall and join the battle. 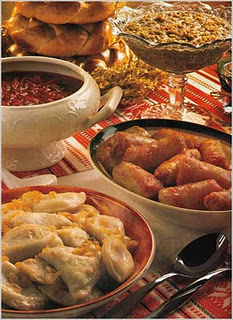 Email ThisBlogThis!Share to TwitterShare to FacebookShare to Pinterest
Labels: Attempted haikus, Life in general, Our house is a very very very fine house

This is a screen capture I took of an ad at the bottom of the page on the Ottawa Sun newspaper website containing a story about new smoke-free public housing being built in Ottawa:

Ah, Sun News Network  -- "Canada's new home for Hard News and Straight Talk" -- the official news website of grumpy old men (who may or may not live in Alberta).

Don't go in the basement 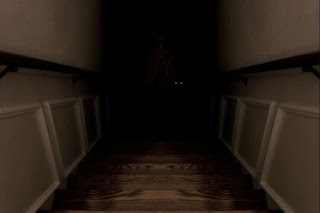 It was 6:40 in the morning. I was drinking coffee in the kitchen, trying to drag myself to full consciousness on the first work day of the new year. I pulled the belt of my terry robe tighter around my waist as I peered out the window at the tail-lights of the early commuters heading into Ottawa.  The house was quiet, only the subdued whoosh of the furnace kept me company as I sipped.

All at once there was a commotion in the basement, and both cats came tearing up the stairs as if all the devils in hell were on their tails. They rushed past me and disappeared down the hall.  I could now hear the noise that scared them.  An eerie, robotic noise -- a staccato barking -- was drifting up the stairs from the basement.

I have a very nice basement, actually, since the reno after the flood.  But, if horror movies have taught me anything, they've taught me DON'T GO IN THE BASEMENT TO CHECK OUT THE MYSTERIOUS NOISE.  Granted, it wasn't midnight during power outage in a thunderstorm, and the house isn't built near an Indian burial ground/abandoned murder-plagued summer camp/sinister mental hospital -- but nonetheless, 'Don't go in the basement' is probably Horror Movie Rule #1 (or #2 right after 'Don't have sex in an abandoned, murder-plagued summer camp').

But someone had to check it out.  It could be a crazed axe murderer the furnace malfunctioning and spewing deadly carbon monoxide into the air.  I decided to send the cats down to check.  They declined by the simple expedient of disappearing under my bed.  It was going to have to be me.

Grabbing the nearest approximation to a weapon at hand, a hefty three-hole punch, and scattering little punched-out paper circles in my wake, I descended the stairs.  The otherworldly barking continued, emanating from the shadowy recesses of the basement.  I inched past the door to the furnace room, three-hole punch at the ready. The sound wasn't coming from the furnace room.

It was coming from the television.  The old television that we have down there that the Wii is connected to.  It was the old television that was emitting the strange noises, EVEN THOUGH THE POWER BAR THAT IT WAS PLUGGED INTO WAS TURNED OFF.  A chill went up my spine and goosebumps erupted along my arms.  The eerie, eerie barking noise was issuing from an electronic device with NO POWER.  Aliens?  Could aliens be transmitting some signal through an unpowered television set?  Poltergeists?  Demons?  Souls from beyond the veil?

I crept closer.  The noise got louder.  "Bark bark" pause "Bark bark".  I reached out a trembling hand and turned on the overhead light.  It slowly flickered to life.  An iPod touch, its screen black and almost invisible, lay on the tv.  I picked it up, and the screen opened, showing a cartoon barking dog, and the message, "Alice, you should be up for school by now".

Not aliens.  Not escaped homicidal maniacs.  Not demons.

I grabbed the device and hurried up the stairs as fast as I could, because everybody knows that Horror Movie Rule #3 is: 'When everything appears to be OK, and the scary noise turns out to be just a cat or an iPod, and the heroine is smiling in relief, that's when the monster/homicidal maniac/vampire springs out of the furnace room and attacks'.

Email ThisBlogThis!Share to TwitterShare to FacebookShare to Pinterest
Labels: Alison vs. the Universe, It's all about me, Our house is a very very very fine house
Newer Posts Older Posts Home
Subscribe to: Posts (Atom)