muw is the coefficient of friction of the surface of underwear, and

After walking back to the office from my car, I am about 30 seconds away from being part of an America's Funniest Home Videos pants-falling-down montage clip.

Recent technological advances have made it possible to share photos and music wirelessly. There is a rover collecting rock and soil samples on Mars right this minute. You can buy bacon chocolate. Please tell me why modern science is UNABLE to come up with a pair of tights that don't keep plunging towards the ground with every step I take, as if they are being acted upon by some gravitational anomaly that accompanies me wherever I go.

Email ThisBlogThis!Share to TwitterShare to FacebookShare to Pinterest
Labels: Alison vs. the Universe, Physics Mondays

Well, first of all, because I hardly ever go to concerts.

And second of all, when I did go to a concert, last week, I drove up to the venue in a borrowed minivan full of children.  Actually, two of the children were borrowed as well.

Not much rocker cred there.

Third of all, I didn't bring my camera, so the only pictures I could take with my Blackberry Curve 8520 that has no flash and about 0.0002 megapixels were....somewhat less than stellar.

So here you have Alan Frew, lead singer of Glass Tiger, doing an amazing acoustic set.  He's not only a great musician, but a really funny guy.  He's the whitish blob on the right of the stage.  The left-hand whitish blob is a guitarist.  Honest. 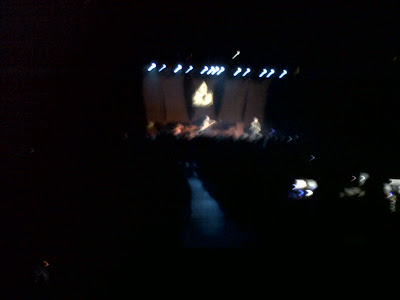 This is Tom Cochrane and Red Rider, still making audiences scream, rocking Scotiabank Place.  They are somewhere in the light. 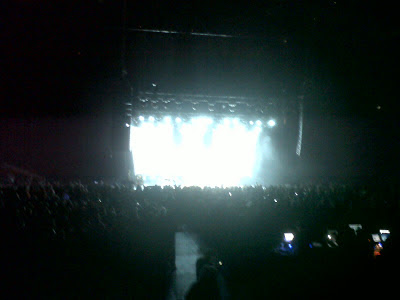 Oh, this one's better.  Tom is the middle figure in black with the guitar, who appears to have no head.  I can attest that he does, in fact, have a head. 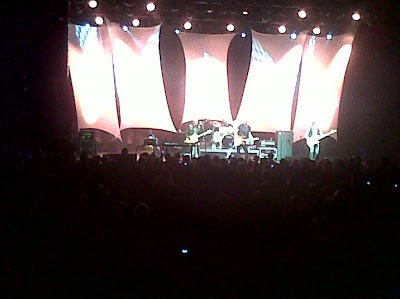 Yeah, I know. Don't quit my day job.
It was Rae's first concert. After each song, she would clap and 'wooohoooo' like it was Lady Gaga up there. She was going wild. So I asked her, "Isn't this great?". She looked at me and shrugged and said, "Yeah, it's OK."  It was all about the screaming and clapping. That's my Rae.
Concert admission: free.  Parking: $8. Four Slurpees for the girls: $17. (Now I know why I never go to concerts, other than the whole 'not being a music photojournalist' thing.) Watching the girls listening to great Canadian 80s rock and new wave: priceless.  A week later hearing Rachel singing 'Sinking Like a Sunset' to herself: beyond priceless.
Posted by alison at 10/17/2012 9 comments:

Email ThisBlogThis!Share to TwitterShare to FacebookShare to Pinterest
Labels: I am Canadian, It's all about me, Life in general, Life with Leah, Life with Rachel, Ottawa

Things Canadians can do on Saturday nights during the NHL lockout

(And if you think I'm being unfair blaming Bettman and the owners for the lockout, just remember that the owners caused the cancellation of the 2004-05 season to create this system (hard salary cap tied to league revenue) that they now say they can’t do business under. Bitch, please.) 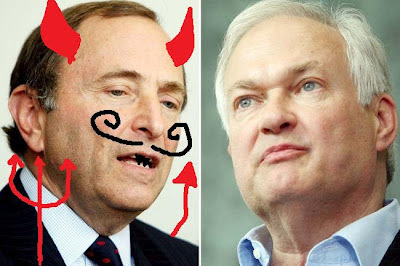 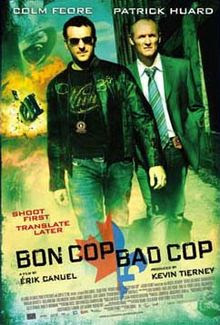 Especially the scene where the cops kidnap the head of the hockey league, Harry Buttman (Get it? Buttman? Heh.), and stuff him in a hockey bag. 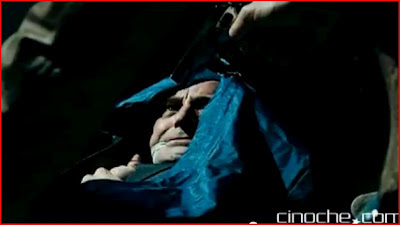 4. Go to the clearance section at Michael's or Wal-mart, buy the loudest yarn you can get, and start crocheting Don Cherry a new suit. 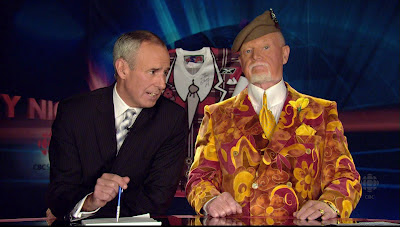 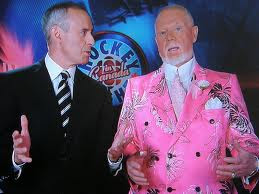 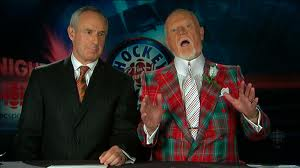 5. Debate the following: Whose mullet was more egregious -- Wayne Gretzky's or Jaromir Jagr's? 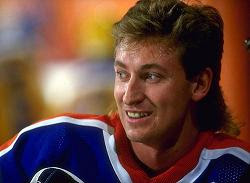 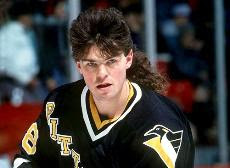 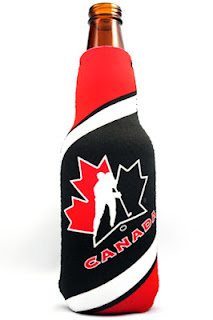 Email ThisBlogThis!Share to TwitterShare to FacebookShare to Pinterest
Labels: Hockey, I am Canadian

Random bitching about the Grey's Anatomy season nine premiere with annotated photos and charts -- because I'm a scientist, dammit

I wish I knew how to quit you, Grey's.

Because, seriously (hah! get it?  'Seriously'?? bwahahahaha), this disrespect for both the characters AND your viewers is getting old.

I've watched this show for going on nine years.  I've turned a blind eye to confusing timelines, to outrageous medical acts that would never happen (cut LVAD wires, anyone?), characters disappearing with little or no explanation (Erica Hahn????), and the preponderance of disasters (ferry crash/shooter in hospital/giant sinkhole/plane crash/bomb in patient), because I really love the characters.

More than you do, apparently.

Oh, it was sad.  And I cried and cried, like you knew I would.  Here he is on his deathbed with his two best friends beside him, Derek and Callie: 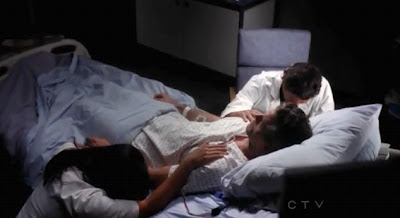 Richard, Bailey, Jackson and Ben are waiting somberly outside. 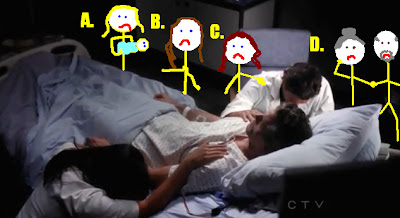 A. Sloane, Mark's daughter, and her baby?  Remember them?
B. Julia, Mark's plot-device, eye-surgeon girlfriend?
C. Addison, his ex-flame?
D. I dunno, maybe his parents???

Maybe I just think way too much about this stuff.

And now onto the next subject.  Geography or meteorology, or both.

(This is what happens when you ask a scientific editor, someone who cares about both consistency AND scientific accuracy, to suspend her disbelief.)

(Yes, it drives people who watch TV with me crazy.)

During the season premiere, we got to visit Cristina at the Mayo Clinic, in Rochester, Minnesota: 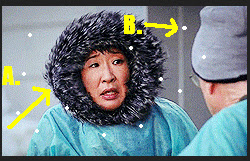 Please note that she is wearing a winter coat under her scrubs, with a fur-collared hood (A).  Also present are blowing snowflakes (B). (Well, OK, I drew those in myself, but only because this is a screen capture from a video [the things I do for you people, it's a wonder I'm sane] and you can't see them blowing around in the photo like you can on the video.)  Shorthand: brrrrr, it's winter, it's cold.

During the same time period, we got to visit April at her parents' farm in Ohio: 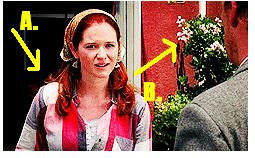 Please note that she is in shirtsleeves (A) and next to some sort of blooming shrub (B).  Shorthand: mmmm, it's nice and warm and summer-like. (She also has a pig on a leash and appears to be channeling Heidi, but that's another discussion altogether.) 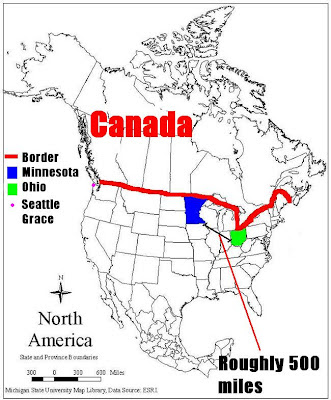 Rochester, Minnesota, is in the extreme southeast of the state of Minnesota, which puts it roughly 500 miles away from Ohio.  And not 500 miles due north from Ohio either.  So I find it very suspect that it's deep winter temps for Cristina and flip-flop weather for April, at the same time.

The plane crash was up in the mountains.  Even at that elevation there was no snow -- and the doctors are in light jackets, so it has to be at least late spring or early summer, say May or June, when the crash happens. (Holy Cats! I do think way too much about this stuff!) 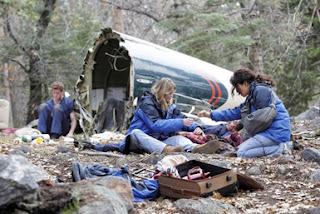 At that point in the year, I don't think you still get blizzards in southern MN.  Let's check out what the climate charts say. (Yes, it's official. WAY. TOO. MUCH.) 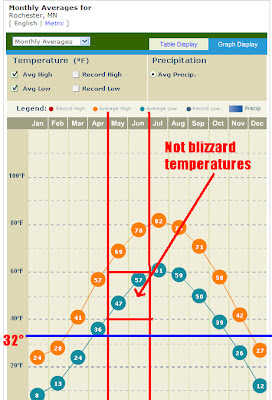 
The only thing I can think of is that the writers, who are probably all from L.A., looked at a map and said, "Hey, Minnesota is practically Canada, it probably snows all the time up there and is full of ice and goofy midwestern stereotype people."  Seriously, Truly, it's the only explanation.

Is it stupid enough that I'm going to stop watching? Oh, hell no. I'm hooked. Despite my bitching, Thursday night will find me curled up on the couch as usual in my PJs with wine and good supply of kleenex.