Snow day or I love Murray

I was inexplicably back in my old apartment in Sudbury, wearing babydoll pajamas, and having a stuffed-animal fight with George Stroumboulopoulos from The Hour, who was ducking and winging teddies and bunnies back at me while simultaneously trying to interview Kingsley Amis over the phone.

Which is a pretty good trick, considering he's been dead since 1995. (Kingsley, not George.) 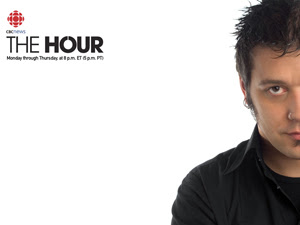 (I think I need a boyfriend.)

Then, of course, the alarm clock went off. Five o'clock. I stumbled to the kitchen and put the coffee on. I'm teleworking today, since Leah and I both have doctor appointments this afternoon. I sure picked a good day to stay home. This is what it looked like earlier this morning. I can't see my driveway. Can you? 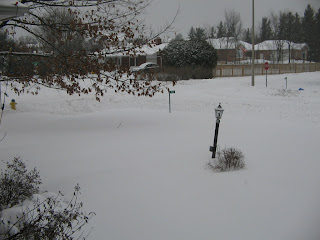 What you might be able to see, if you look carefully, is the plow ridge. I live on a corner. This is not an advantageous place to live during snowplow season. Plows turning the corner scrape up more snow than they do on a straightaway, and once they straighten out, incrementally more (or magnitudinally more) snow gets dumped across the end of your driveway than in driveways farther down the street.

I was standing at my front window with a coffee in my hand watching the snow falling and the chickadees at the bird feeder when the plow went by. It dumped 456 cubic metres* of snow across the end of my driveway. Not being satisfied with this, the driver backed up around the corner and plowed again, uncovering part of my lawn and depositing a further 1276 cubic metres of snow onto the pile (*all amounts are approximate). I was very visible in the window. He studiously avoided meeting my eyes as he slowly drove past. I sipped my coffee and resisted the urge to wave to him using only one finger.

In order to get to the doctor's later, I'm going to have to get the car outta the garage, down the non-existent driveway, over Mt. Plow Ridge, and out onto the nice clear street. This was a job for Murray. I love Murray. I can always count on him. All he asks is a drink of gasoline and a plug-in start, and he's good to go. Murray is my snowblower. Now, I'm Canadian enough to enjoy shovelling my driveway when it's a light couple of centimetres, but when it's a dumping and there's a plow ridge that hardens like concrete 5 minutes after it's been deposited, you pull out the big guns if you have them. And Murray is my big gun. See? 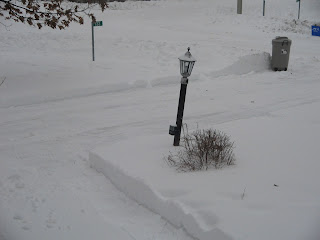 George is pretty hot and all, and probably pretty strong too. But I bet he can't clear a driveway like Murray.
Posted by alison at 12/03/2007