For Jazz - Jason and the birth control pills 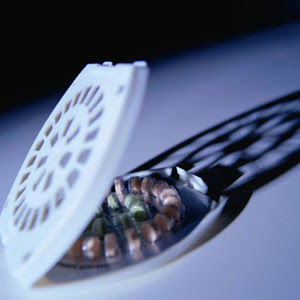 Many years ago, when I was just out of university, I moved to Toronto for a job. My first real grown-up job. (Yes, it was during this period that the horrible thing happened. But I digress...) My boyfriend moved with me, and we were sharing an apartment with an old university friend of mine.

I was apprehensive about starting work in a new office. Most of the people there were around my own age and they seemed a friendly bunch. There were the other junior editors, the senior editors, the cartographers, and the admin staff.
At the end of my very first day, I was standing in my office, getting ready to go home. I had one hand in my purse, looking to grab my hairbrush and brush my hair before setting off, when Jason, one of the cartographers, appeared in my doorway to ask if I wanted to go out for beer and wings with the gang. I had spoken to him only once before, when we were introduced that morning.

"Sure," I said, thinking it was nice to be invited along on my very first day, and, a little nervous and wanting something to do with my hands, pulled my hairbrush from my purse. It was one of those skeleton brushes that were so popular back then: 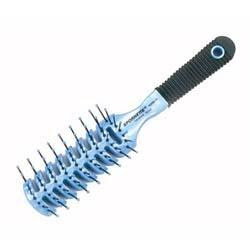 Each of the stiff plastic bristles was tipped with a flat disk, like the head of a sewing pin. And one of those bristle ends caught in one of the holes in the birth control pill compact that was also in my purse -- the holes that let you push a pill through.

So, as the brush cleared the purse, the pill compact somersaulted lazily in a high arc through the air. It seemed to fly in slow motion. In my head, I was screaming NOOOOOOOOOOOO, but could only watch speechlessly in horror as the compact bounced once on the floor and skittered over to come to rest against Jason's shoe. We both looked down at the pills and then up at each other, and without hesitating a second, he said, "So, are you busy Saturday night?" and grinned. I cracked up, and we were friends from that moment on. The end.
Posted by alison at 12/07/2010

Email ThisBlogThis!Share to TwitterShare to FacebookShare to Pinterest
Labels: Alison vs. the Universe, It's all about me, Tee hee