Leah is totally nuts over those Where's Waldo books. In addition to the French books she brings home from the school library (just an aside here, with my advancing French training, I've got almost as good a vocabulary as my Grade One daughter, and I can totally kick her butt at passé composé, which is good because the last book she brought home, "A la magasin de jouets" was all written in past tense, something that would have totally puzzled me mere weeks ago. But I digress...) she's been bringing home those "Where's Waldo?" books. 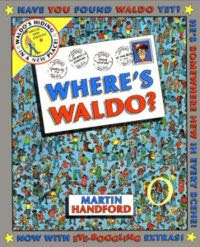 For those not in the know, the books feature crowd scenes and Waldo is in each one. The trick is to find him. I nearly wore my eyes out the other night, as we were trying to make our way through the fiendishly difficult "Where's Waldo in Hollywood?". Finally I called a halt when we were both going cross-eyed trying to find the little guy with the red and white striped hat in a very busy crowd scene of a movie filming the fall of Troy.

But all that eagle-eye practice came in handy later, when I dropped my little blue birth-control pill on the multicoloured striped rug on the bathroom floor. Thanks to all my practice, I found it in less than a minute. Thanks, Waldo.
Posted by alison at 3/12/2007

Email ThisBlogThis!Share to TwitterShare to FacebookShare to Pinterest
Labels: Family time, It's all about me