Gather round the campfire, children, and I'll tell you all a ghost story.  A story of how I once stayed in a haunted hotel and had a ghostly visitor to my room in the night.

And it's all true.  Every word.

This is the Stanley Hotel in Estes Park, Colorado.  It was built in 1903. 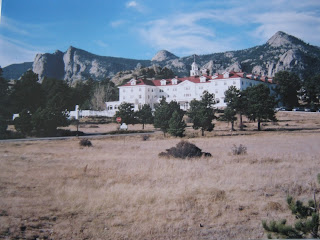 It's lovely. It's also reputed to be haunted.

In 1974, Stephen King stayed here on the last weekend before winter shutdown, and his experiences in the hotel became the basis for his novel The Shining.   (I just shivered a bit.  Did you?)

In 2004, I visited Estes Park for an Association of Earth Science Editors annual conference and stayed at the Stanley Hotel.  I was very excited to go to the conference.  The program was great, it was an exotic place to visit, and I would get to spend time with Evelyn, the BFF, who works and lives in Nova Scotia.  As I boarded the first plane in Ottawa, I noticed that I had the beginnings of a runny nose, and a bit of a dry throat.  By the time I changed planes in Chicago, I had begun to cough.

I stopped at one of the shops in the concourse in O'Hare Airport and looked through the limited selection of cold remedies.  There wasn't much time to compare, so I grabbed some Dayquil, figuring that I would need a non-drowsy formula if I wanted to stay awake and alert during the conference talks.

We arrived at the hotel and checked in.  Normally, when we go to this annual conference, Evelyn and I share a room. 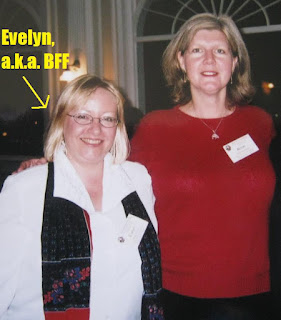 It cuts down on travel costs and gives us more time to spend together.  But since the hotel was built in an older era, there are very few double rooms, and they had all been booked.  I was given a small single room at the very end of a long corridor on the third floor.  I wish I had taken a picture of just how long and shadowy and empty that corridor was.  Wait, I found one on Google: 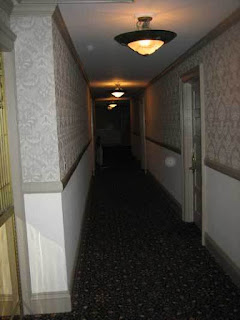 The room was dominated by a four-poster bed, and had little else in it: a small dresser, a smaller desk, and a television.  Old photographs decorated the walls. 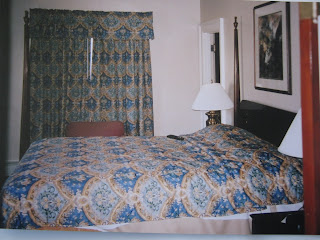 It was so much fun to reconnect with friends and colleagues.  We had arrived in the late afternoon, just in time for the icebreaker get-together.  Ev and I had a blast. 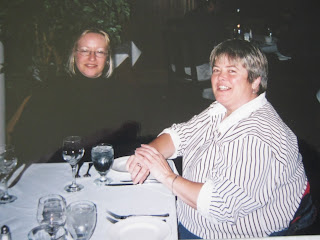 After several a few glasses of wine and a meal, and a few more glasses of wine the BFF and I left the dining room.  We climbed the stairs and she got off on the second floor while I continued to the third and headed down the long corridor to my room.  The cold meds were doing a pretty good job of keeping my symptoms at bay, and, since I had somehow gained a second wind, I lounged on my bed and flipped through the TV channels.  The Stanley Kubrick movie version of The Shining runs on a 24-hour loop on one channel in the hotel, so I settled in to watch it.  Watching a scary movie all alone in a hotel room in a reputedly haunted hotel is not a very good idea.  It was very, very late when Jack Nicholson finally froze to death, but I was too spooked to sleep.  I left the lights on, but hardly slept at all, jumping at every creak and thump of the slumbering hotel.

I popped another Dayquil gelcap in the morning and headed to hear the full day of conference talks.  I was sleepy, yet wired.  My cough intensified during the day, so I had another one just before dinner.  Again, I had a hard time sleeping, managing only a couple of hours, even though I steered clear of the scary movies. 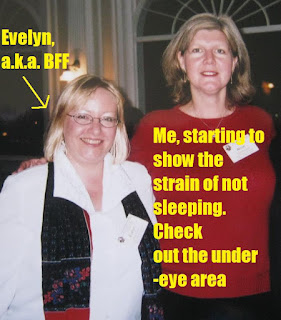 The next day was a busy one, the field trip through the geology of the amazing Rocky Mountains, ending up with dinner at a mountain lodge. 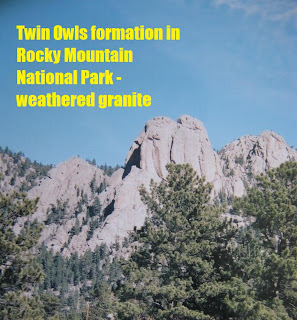 When we returned to the hotel, it was time to get ready for the Ghost Walk that some of us had signed up for.  The hotel is famous for being home to many ghosts, several of them children, and the walk is a popular attraction. The tour guide showed us pictures of strange glowing orbs that had been photographed in hallways and in the grounds: 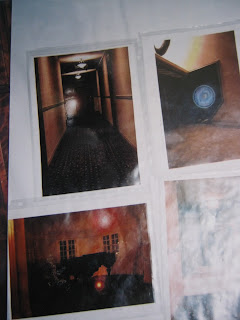 We heard about the young boy who peeks out of upstairs windows. 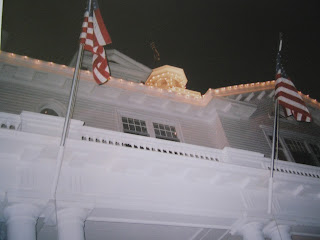 And the ghost of the first owner's wife who likes to appear on the staircase. 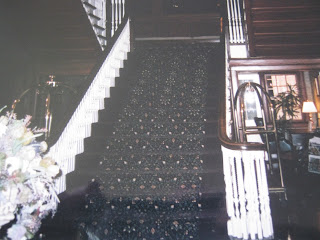 We even took pictures in a mirror that is supposed to reveal a phantom when the photo is developed, but all I got was the flash reflection. 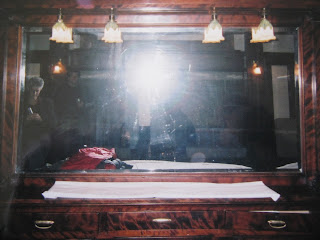 We decided to end the evening with a nightcap before bed, so we headed to the bar.  We talked a lot about ghosts.  I took another gelcap to ease the cough and runny nose that had returned.  I had a glass of wine with Linda and Marie-France and Evelyn and Joel. 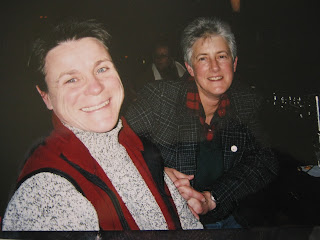 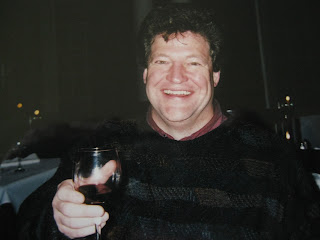 After a while, I left the others and headed for my room.  It was late.  The stairs and corridors were empty.  I was a bit unsteady on my feet from the wine. The hallway seemed to elongate as I walked down it.  It was eerily quiet and I got spooked and ran the last third of the way before slamming the door and locking it behind me.

Once again I was wide awake.  Reading didn't help, so I finally turned out the light and tried to sleep.  After a while I dropped off, but was awakened by the noise of someone returning to their room further down the hall.  As I settled back on the pillow, I realized that I could hear a strange rhythmic noise.  It rose and fell as steady as a metronome.  I sat up and the noise stopped.  I turned on the light with a shaking hand. Nothing.  The room was empty and looked just as it had when I went to bed. I turned off the light and lay back down again, and the noise started again. A shusshing sounding like someone was rocking in a rocking chair on carpet.  Back and forth.  Back and forth. And it was coming from inside my room!  Between my bed and the door!

I sat up and turned on the light again. Nothing.  Lights off.  Lie down.  The noise came back.  I was terrified.  I sat up.  I considered going to find Evelyn's room, but it was after 3 a.m. and quite frankly I was scared to leave the room.  I kept the lights on and sat up in bed for the rest of the night, and the ghostly sound didn't come back.

The next morning, as I was leaving my room for breakfast, I glanced at the old photo that was next to the door.  It was a photo of my room as it was when the hotel opened in 1903. 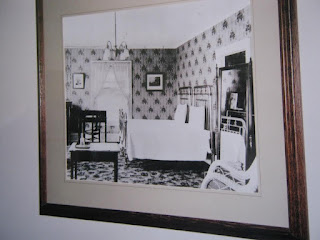 And then I looked closer at what was in the corner of the photo. 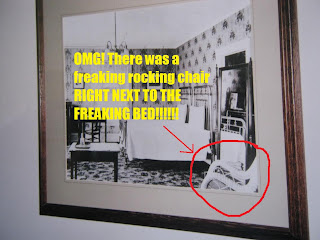 Back in 1903, there was a wicker rocking chair in the corner of the room that I was sleeping in.  And I heard it more than one hundred years later, rocking beside my bed.  Whose ghost had been rocking in the phantom chair?  I'll never know.  I like to think it was the ghost of a little girl.  Maybe the daughter of a maid, rocking in the chair while her mother made up a guest's bed.

You can stop reading now if you are shivering deliciously at the thought of someone you know having an otherworldly encounter.

But if you keep reading you'll find out that later I read the cold meds package and discovered that the non-drowsy formula doesn't just not make you drowsy, it actively keeps you awake.  So the effects of the head cold, plus eating cold medicine caplets like they were M&Ms, which led to my sleeping maybe 10 hours over 4 nights, plus many several glasses of wine, plus my overactive imagination in overdrive due to scary movies and ghost walks, created a tired and wired state of mind in which I was unable to realize that the noise I was hearing was my own pulse beating in my ear.  When I was lying down with my ear mashed against the pillow, I could hear its monotonous rhythm; whenever I sat up, I couldn't hear it anymore.   I figured that out the following week when I heard that very same noise in my own bedroom at home, when the cold had mutated into a full-blown sinus infection.  And man, did I feel silly.  Because, of course, I had told everyone of my encounter from beyond the grave.