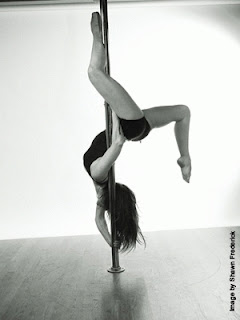 Rachel does not like wearing clothes. This isn't so bad in the summer, when she runs around the place wearing her bathing suit most of the time. But now, in the depths of winter, as soon as we get home after work, school and daycare, she starts undressing as soon as the door closes behind her, leaving a trail of clothes leading towards the living room like a newlywed's tease.

First it was just the socks. Then for a while it was the socks and pants -- she'd play with her Barbies wearing a top and underwear. Then it progressed until she was just wearing her underwear. Which is where I drew the line. Hey, I'm all about comfort, but her toilet hygeine hygene bum-wiping skills are somewhat rudimentary, and I like my furniture.

"Alison," I hear you saying, "you must be keeping your house much too toasty. You have only to lower the thermostat and Rachel will keep her clothes on." You'd think so, wouldn't you. Au contraire, mes amies. I did an experiment where I kept lowering the thermostat to see what temperature would finally convince her to put some clothes back on. It took some time, but I found the temperature: 63° Fahrenheit. At which point I was wearing jeans, socks, slippers, a teeshirt and two sweatshirts and my nose was red. I'm not spending all my time bundled up like that in my own home. So I've decided to live and let live, after all, it's just us three girls at home.

The downside is that she's so used to being undressed, she'll probably be pole dancing by the time she's 16.
Posted by alison at 1/31/2008